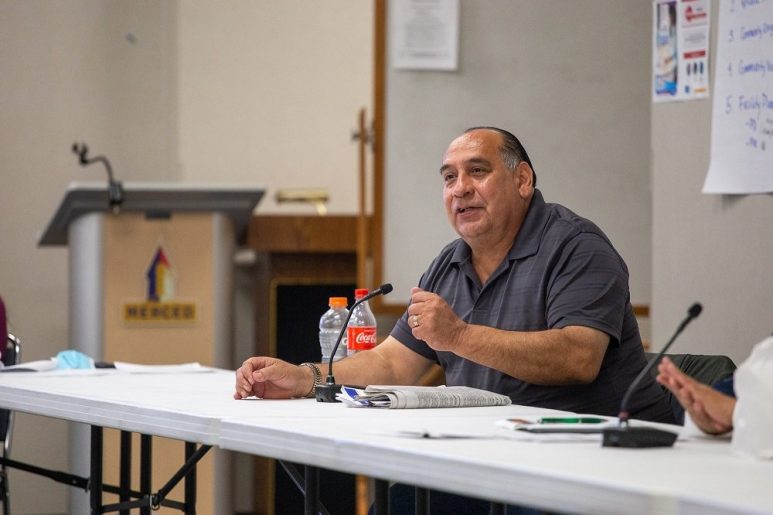 ‘It’s cheaper to help a troubled child than to fix a broken man.’ — Councilmember Fernando Echevarria, speaking about the importance of working with young residents to help those who are headed down a bad path so that they can break the cycle of community violence. 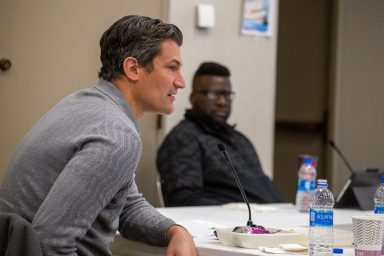 ‘Personally the more I think about the encampments, from seeing what other cities are doing especially right now, it seems like too much and just a bad idea to do one big one, when our latest count is going to have close to 200 people out on the street.’ — Merced Mayor Matthew Serratto, sharing his thoughts on creating campgrounds for homeless Mercedians. 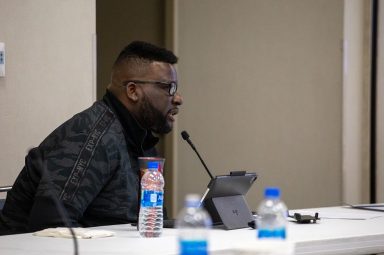 ‘There’s a lot being done and we have to tell the people. I understand maintaining that confidentiality, but there’s a portion of that that is not serving us well — to be holding things so close.’ — Delray Shelton, discussing about working to make sure Mercedians know about new economic developments as soon as possible. 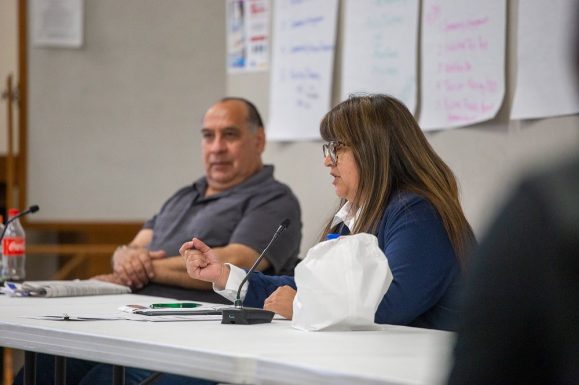 ‘There are people who you think would want to use the Roomkey program, but they don’t, so the encampment might be a solution for those who want to feel that they still have freedom in their lifestyle.’ — Councilmember Bertha Perez, sharing her thoughts on a what homeless campground may offer less fortunate residents. 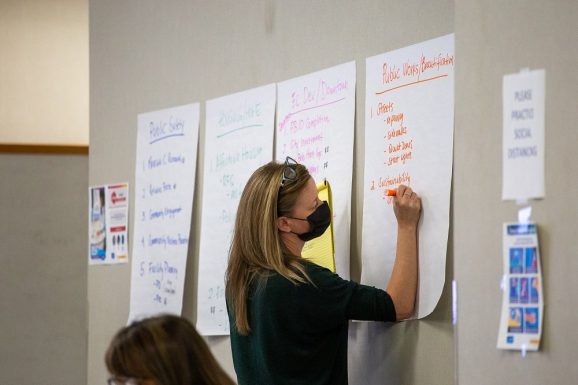 City Manager Stephanie Dietz writes down highlighted points from leaders as they discuss the direction they would like to see Merced grow toward over the course of 2021 and into 2022.

Members of the Merced City Council and city department heads gathered recently for a strategic planning session to discuss budget priorities and chart a course for growth in the coming months and into 2022.

The gathering last Saturday came on the heels of recent Town Hall meetings where residents were invited to express their views on city issues.

One of top concerns for leaders continues to be the future status of Measure C which expires in 2026. Over the years, the half-cent sales tax has been critical to providing funds for public safety — particularly impacting the number of police officers and firefighters to cover the growing city — as well as Public Works projects linked to street repair.

Leaders are counting on a renewed Measure C ballot measure that voters would support in order to avoid what they predict will be drastic cuts.

“Frankly if we can’t pass it, and extend it prior to that date [2026], I think we’re going to be in a lot of trouble,” said Councilman Kevin Blake.

The big question before the council in recent years has been about the “when.” Precisely when should the city place an extended Measure C before the voters? When is the most opportune time to receive broad voter approval?

Blake is the camp that says the sooner the better. If it fails passage, the thought is the city would still have a chance to go back to the drawing board and rework its strategy before the measure sunsets.

“So if this measure is not extended, you’ll be potentially looking at 31 people with layoffs,” said Dietz. “That’s far more than the vacancies we carry now, and so we wouldn’t be able to handle that with attrition.”

He said the data covers activities that are more public facing, and does not take into consideration the hours and staffing needs for the necessary but less publicly noticeable work done by the departments.

At the meeting, it appeared city leaders are leaning on bringing the issue to voters in the next gubernatorial election in 2022. Additionally, a sub-committee was designated for community engagement and education about the services provided by Measure C.

Talk about creating sanctioned campgrounds for homeless people in the City of Merced has been gaining momentum in recent months. But are leaders serious about taking action in this respect.

“I like the encampments [idea], because there are some people who want to stay out,” said Councilwoman Bertha Perez. “There are people who you think would want to use the Roomkey program [A state strategy that has been funding hotel rooms for people during COVID-19.] but they don’t. So the encampment might be a solution for those who want to feel that they still have freedom in their lifestyle.”

Councilman Blake added: “We toured Modesto, where they had a big problem with homeless specific to a certain park in their community, and through a partnership of their equivalent of what the Continuum of Care is to us, they procured a bunch of FEMA tents, and it was like an entire self-sustaining city essentially.

“If we do transition to that type of approach, where we have sanctioned ground, there should be some dumpsters and things of that nature, maybe a place to wash up and a place to use the bathroom… But I think the less ownership and the less responsibilities we [City of Merced] have in that would be a good thing.”

Councilman Fernando Echevarria has been a very vocal proponent of the campground idea.

“I have some good news,” he said. “I have a private owner of property in El Nido [an unincorporated region under county jurisdiction] that has potentially 80 areas that can have camps. The individual I have spoken to is ready to accept them. We may have to speak about how he is going to get reimbursed, or if he is going to find other grant funding.” Echevarria said the property owner is looking to first house homeless veterans, and then next women who are single and homeless and struggling, and then homeless men would come afterwards.

“We really have to look at a legal campground with restrooms, trash containers, and than maybe we can get some of the non-profits that have that trailer (mobile shower facility) to come in every other day, or three times a week, because we can’t expect them to be there every day, to come in.”

Echevarria advocated for breaking up the campground areas into two to three smaller campgrounds, which “may be more palatable to many of our residents.”

“Now we would have 80 spaces in El Nido, we would have 66 spaces at the Navigation Center, and then we have another 10 low-cost apartments that are going to be constructed near B Street. So let’s start adding them up, and once we reach that mark, law enforcement will be able to do their job,” Echevarria declared.

Recent state legislation requires that cities maintain enough housing spaces for homeless individuals prior to the enforcement of no-camping ordinances.

Mayor Matthew Serratto was one of the city leaders not buying into campground idea. “Personally the more I think about the encampments, from seeing what other cities are doing especially right now, it seems like too much and just a bad idea to do one big one, when our latest count is going to have close to 200 people out on the street. So to take 200-plus people and round them up and put them in one place where the impact is all concentrated, and then all of the sudden you own that encampment. You own it. And now all of the sudden you have to serve it, you have to provide food, anything bad that happens there you’re liable for it.”

Serratto explained that as part of his job working inside of the District Attorney’s office, he has seen five cases involving murder at local encampments.

“Now all of the sudden, you own that potential for violence,” he said, “and that is just the killings.”

Councilwoman Perez expressed reservations about the idea of a sanctioned campground in El Nido, saying that the act of being homeless is not in and of itself a crime and that city leaders should strive to find a better solution, as they are still residents of the area regardless of their housing status.

Perhaps Blake was going to inform Echevarria that anything like a homeless camp on a county land in rural El Nido would have to go through the Merced County Administration and the county’s Board of Supervisors.

Nevertheless, the conversation remained provocative as leaders discussed working more extensively with Cal-Trans to better manage homeless hot spots such as Highway 99 on- and off-ramps, and continuing to build on partnerships with other government agencies and local nonprofit groups that are already caught up in the fight to end homelessness.

Leaders spent time brainstorming ways to improve Main Street and keep it clean and inviting. City Manager Dietz revealed the city has begun working with a consultant to bring in a variety of services to the downtown core. These new service ideas include private security coverage, sidewalk cleaning, event organization, branding and marketing.

Going forward, the overall the decision-making process for the downtown core along Main Street would be in the hands of the consultant and business owners — as opposed to the City of Merced.

“We’re essentially moving it away from us and privatizing it, so it really has the most bang for the buck,” said Dietz. “It really is the way that every other downtown in the Central Valley is functioning and we’re behind the times in that regard, but we’re stepping up now.”

Mayor Serratto would like to see additional investment from the city in creating more striking entrances to downtown Merced. Serratto suggested that this could be accomplished with simple signage, possibly on Main Street’s intersections with G Street and R Street, along with upgraded landscaping in the same areas. Once created, the maintenance of the entrance areas could then be handed off to the consulting agency going forward, according to Serratto.

Councilman Shelton expressed his thoughts that the city should be working harder to make sure residents are aware of what’s being worked on as soon as possible.

“I think it’s something as simple as… reimagining our newsletter,” said Shelton. “There’s a lot being done and we have to tell the people. I understand maintaining that confidentiality, but there’s a portion of that that is not serving us well — to be holding things so close.”

He went on to say that once projects are brought into the public light, the city should strive to keep providing updates to the public.

During the discussion, Economic Development Director Frank Quintero noted that currently his department is working alongside of the Information and Technology Department to provide an online update of ongoing and upcoming projects in Merced.

“It would be an Economic Development update, and it would be once a month, because I think you’re right. There is a lot going on but I don’t think the general community has an understanding of that.”

Interestingly, Quintero said the city has seen an increase of interest from Agricultural Technology companies, and noted the need for creating an additional industrial park. He said the potential of significant new industrial investment will help attract smaller supporting companies that offer specialized products and services.

This year’s Strategic Planning Session was not short on topics to discuss. The City Council also tackled multiple issues surrounding ongoing efforts to:

As the meeting came to a close, City Manager Dietz noted that she would look to direct city staff to the overarching themes she had gleaned from the meeting — including rebuilding a sense of community, inclusion of all residents from all backgrounds, establishing a general sense of excellence, and elevating the city’s quality of maintenance.

Those who are interested in reviewing the entire meeting can do so online by logging onto cityofmerced.granicus.com/MediaPlayer.php?clip_id=416.