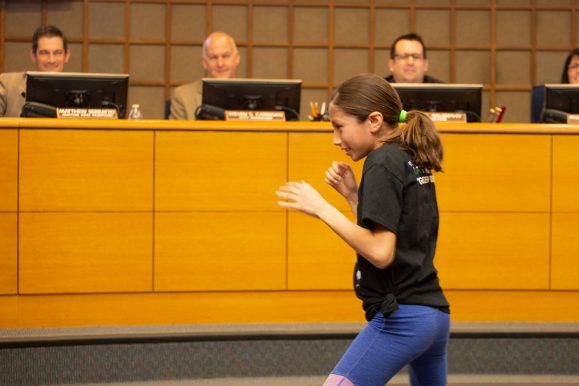 PACKING A PUNCH — Little Brianna Martinez of Merced shows off her boxing moves in front of leaders at the most recent Merced City Council meeting. Martinez was recognized for being one of the top boxers in the nation in her age and weight class. She is a four-time National Champion and a Junior Olympics gold medalist. Her record is 25-2. She hopes to compete in the 2028 Olympic Games, and eventually become a veterinarian. 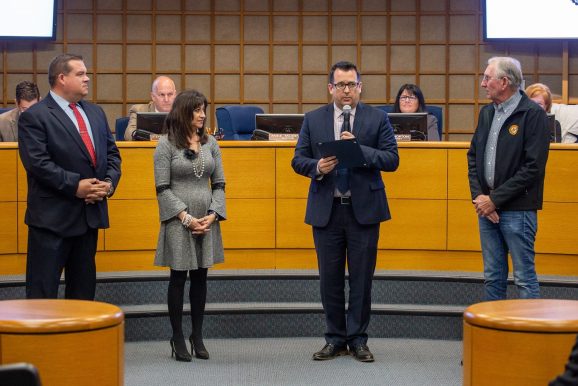 Merced Mayor Mike Murphy presented certificates of appreciation for community sponsors of the 2020 State of the City presentation earlier this year at the Merced Theatre. Three groups were honored and they were represented by Joe Doyland of the Educational Employees Credit Union, Rosie Nunes from Central Valley Community Bank and Dave Long from the Merced Irrigation District.

Barring a massive show of public disapproval before and during the next meeting of the Merced City Council on March 16, leaders are expected to raise the monthly rates Mercedians pay for refuse collection.

As reported in a Times story late last year when the ordinance was being drafted, the rate increase would be a significant pocketbook hit for many folks — and it’s set to start July 1.

Last week the City Council voted 5-1 to approve an ordinance that will raise residential refuse rates a whopping 20 percent during fiscal year 2020-21, and then 5 percent each subsequent year until 2024-25.

A second and final public reading of the ordinance is set for March 16; however, if no leader or member of the public speaks out, the issue is bound to be quickly passed with a list of other agenda items.

The lone leader who has voted against the steep increases is Councilman Anthony Martinez, who urged his colleagues and city staff to come up with alternative ideas — perhaps specialized lower rates for those consumers who don’t generate a lot of garbage, or spreading out the rate increases more evenly, or creating a lower reserve amount the city keeps on hand to fund its refuse operation.

“I’m looking at ways that we can help the people,” Martinez said. “It’s becoming something of an issue the people are concerned about, obviously, and if we can come up with something to help ease [the cost] then that may be something we want to do.”

Prior to the meeting, there were 22 letters of protest from residents contesting the rate increase prior to last council meeting.

One letter sent to City Hall was also sent to the Times. It was from Adam Cox, a local resident who is known for serving on the board of the Merced City School District.

“I’d like to know: Why should the residents of the city be the first to carry this burden?” Cox wrote. “Has the City of Merced, in good faith, gone to the Merced County Association of Governments (MCAG) and demanded to know why municipalities in Merced County pay significantly higher tonnage rates than do jurisdictions from outside the county?

“You have a deficit problem. I get that. But why in the world would you force hardworking people to pay more? In reality all we’re doing in this county is subsidizing all of the out-of-county jurisdictions whose trash MCAG accepts for pure profit and to the detriment of available landfill air-space that future Merced County residents need? The Merced County Civil Grand Jury in their 2018-19 report detailed the immense gap between in-county and out-of-county rates. We residents pay tipping fees of $43.05 (exclusive of additional hauling expenses by third parties). Cities and counties from outside the area? They’re at $19 – $25. Why are you OK with this?

“Where were you guys when MCAG was making these sweetheart deals for the past several years? Last fiscal year MCAG transferred $5 million of “excess revenue” from its operating budget into its capital project budget. The same was done ($4.6 million) in 2017. Why wasn’t a portion of that used to lower rates of MCAG customers which in turn would lower rates for their residents?”

“Shame on you for coming after your residents first instead of playing hardball to lower your costs.”

Cox added to the Times, “What this is really about is the city taking the easy route by forcing a massive increase on us instead of spending time and energy (because that’s all it will really take) to push back on the systemic inequity that MCAG makes millions of dollars of profit on each year. Who’s here to serve who?”

According to the city’s consultant, R3 Consulting, the refuse rate hikes are due to overall collection expenses which have risen 29 percent since 2016. There’s also new California regulations coming down the legislative pike, and an extremely tough ban of certain types of solid waste in China that’s drastically shifted the global recycling market.

Then there’s more and more residential development that’s increasing collection, according to the consultant.

Meanwhile the city has reported that rising refuse costs have resulted in a $2.2 million deficit in their operation.

Officials say the refuse rate increase will bring down that deficit.

The city is mandated to keep fee increases in line with the proportional cost of the service. Revenues can’t be used for any other purpose.

With the new strategy, city officials have a goal of reaching a 16 percent operational reserve for their garbage service.

At present, residential refuse collection in Merced is actually slightly higher than similar cities in other areas of California, according to the consultant. But they also point out that cities across the state are going through rate increases.

So the strategy is to have the city’s commercial clients bear a higher percentage of the overall rate increase, mostly because the rates they currently pay are up to 51 percent lower that those in neighboring and comparable cities.

Leaders also want to include in those commercial rates some funding for an annual $250,000 “litter abatement” contract for a private or non-profit agency to supplement trash pickup in alleyways, along creeks, parks and other problem areas throughout town.

At last week’s meeting, the city’s consultant mentioned the group “Restore Merced,” which employs at-risk individuals in a program to change lives. Mayor Mike Murphy has been vocal in his support of the program; however, city officials mentioned in a previous meeting that the contract would go out for public bids.

A majority of city leaders have said they prefer a larger increase upfront while the economy is doing fairly well, as opposed to spreading more even increases over a five-year period, to get where the city needs to be in regard to revenue vs. expenses.

Council member Jill McLeod noted that the city’s refuse rates have not risen significantly for several years while operational costs have continued to soar.

Mayor Murphy said: “It’s one of those responsibilities that we have as elected officials — to make sure we have proper funding for those essential services we provide.”

In other council news …

Council members unanimously approved a $4,526,455 contract with Tyler Technologies that will move the city on to a new computer software system to replace the 31-year-old software it currently uses. The contract is for 5 years.

City staff also gave an update on a strategy to have voters renew Measure C — a half cent sales tax approved in 2006 that supports 31 full-time employees and a number of special projects. The measure expires in 2026, and leaders are expected to place Measure C back on a future ballot.