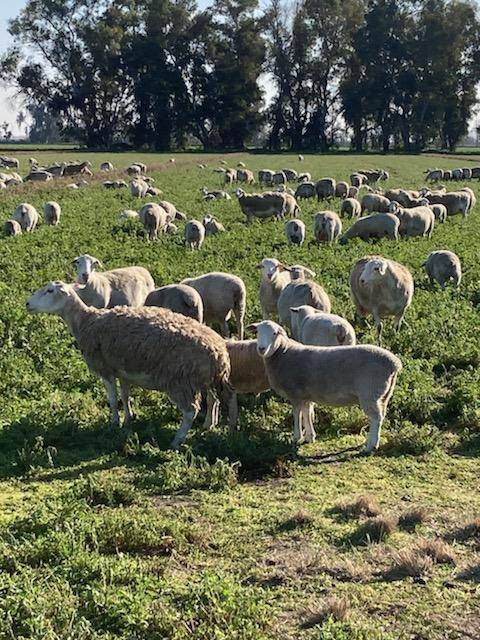 About 1,200 Dorper sheep were deployed near the city’s wastewater treatment plant to eat up weeds and stubble.

Near its wastewater treatment plant, the City of Merced farms about 700 acres of winter wheat, alfalfa and corn to support a sustainable operations program — but that means weeds, stubble and unwanted vegetation must be dealt with every year.

This year, the city of Merced found an eco-friendly way to keep the weeds and wheat at bay.

Charles Slagter, operations supervisor at the city’s wastewater treatment plant, said 1,200 sheep were brought in to keep the property clean and the experiment worked wonders and likely will be repeated next year.

Andree Soares of Los Banos, owner of Star Creek Land Stewards, said 1,200 Dorper sheep were deployed in the beginning of February to the city’s property south of Merced to eat up weeds and stubble. They finished the job and have since been moved to Marin County and other San Francisco Bay Area locales to perform fire prevention measures.

Soares says this was their first year with the city of Merced and it worked out well for her as well as the city. Two herding dogs and a sheepherder kept the sheep safe and focused on their task at hand.

Slagter said the rising costs of herbicides and pesticides, aggravated by COVID-19 shortages, prompted the city to look for alternative methods to deal with both wanted and unwanted growth.

“We go to great lengths in treating wastewater to reduce toxics released downstream. The sheep are natural-born grazers. We had a $15,000 to $18,000 savings on spray and having to disc it over. That saves about $85 to $100 an acre,” Slagter says.

It costs the city several thousand dollars to use the sheep but there’s an added benefit. The sheep also fertilize the fields and it’s a nice, symbiotic relationship that definitely is successful.

Chick weed is the bane of farmers everywhere and the sheep help hold down the numbers of insects, pests and weevils. In past fall seasons, the city had to spray before the alfalfa was planted.

“Grazing is not a new thing but it has fallen out of favor lately. We’re new to this operation. There is some crop loss but it is minimal,” Slagter says.

The city has been farming near its treatment plant for twelve years. Effluent from wastewater treatment helps the city yield seven to eight tons an acre every year. The city grosses close to $1 million in hay sales which offsets the treatment plant’s operating budget. The feed crops are used exclusively to feed animals.

Slagter said Soares’ company took care of everything for the city, setting up the fences and perimeter.

“It’s a win-win situation and everybody wins. We like what we see. With rising costs of fuel, chemicals and water shortages, we try to hold down costs. This is a no-brainer for me,” he says.

The city has been actively engaged in sustainable programs for the last twelve years. Next to the treatment plant are 350 acres in a wildlife management area. That is home for migratory waterfowl and small mammals.

Slagter has been with the city for 22 years, the last 12 as a treatment plant supervisor. His family farmed 700 acres in Winton.

Soares said her grazing operation goes from spring to late summer. With increasing fire dangers in Northern California, her operation has grown in demand. She started Starcreek Land Stewards 14 years ago and two employees do all the heavy lifting — with the help, of course, from 1,200 hungry sheep and a couple of herding dogs.