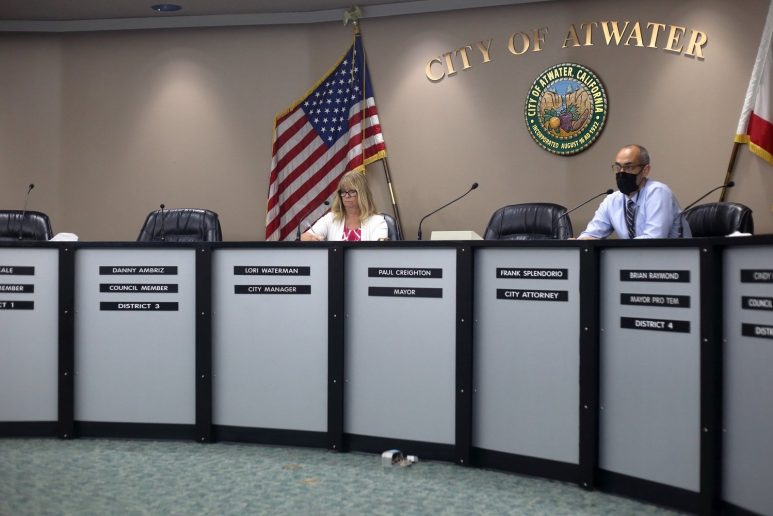 City Manager Lori Waterman and City Attorney Frank Splendorio sit inside of the City Council chambers during Tuesday’s special meeting to consider a general sales tax in Atwater for the ballot. 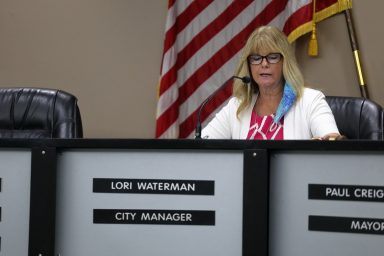 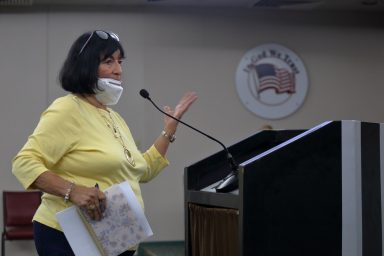 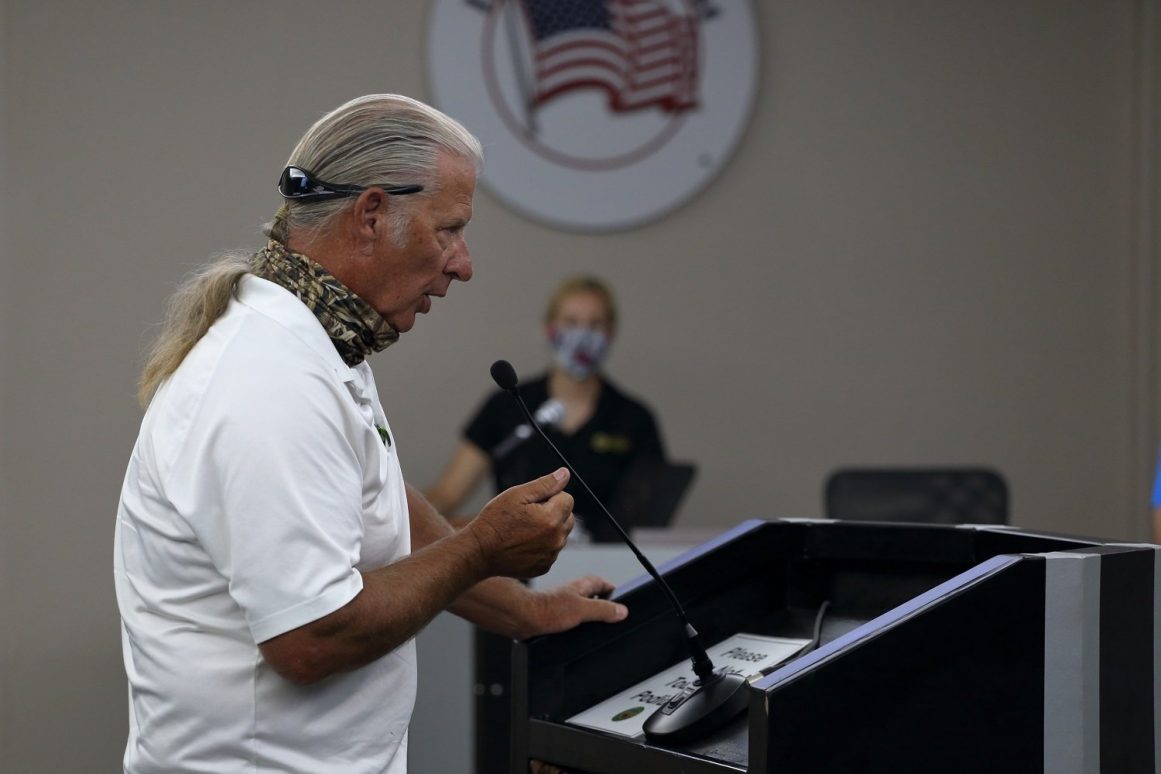 Present inside of City Hall was City Manager Lori Waterman, City Attorney Frank Splendorio, and members of city staff with the entirety of the council and Mayor Paul Creighton attending the meeting electronically.

As the meeting got underway, council members and residents voiced their support for ensuring the continued funding of police and fire services, while noting that they either felt there were issues with the current draft of the proposed tax or that the timing of the tax was not exactly the best due to the ongoing pandemic.

Ultimately the special meeting’s only agendized item would die for lack of a motion by members of the council. The result followed a similar action earlier Tuesday when the Merced County Board of Supervisors unanimously struck down a plan to put a countywide one-half cent general sales tax on the November ballot.

Back in Atwater, local resident Linda Dash was the first to make her way to the podium to share her thoughts on the proposed raise in taxes. Those in attendance were able to hear her comments directly, with the City Council and mayor having her comments relayed to them over an Internet connection.

“I thought there was going to be a discussion, similar to a budget discussion, and I didn’t know we would only be able to speak once before,” Dash began. “I’m here to say that I’m against this 1 percent sales tax. I believe Cindy Vierra made a statement during a City Council meeting, and I don’t want her seat, but for people who had ideas on how to fix things to contact someone and let them know, and well I have a lot of ideas that I think are a little bit better than raising the tax by 1 percent.”

Dash went on to remind city leaders that many residents are out of work and struggling to make ends meet.

“Something close to 9 percent is not going to be a lot of fun for them. I’m against it, the way it is right now, and I think you need to stand with what you got and try to extend it maybe indefinitely. If you had an oversight committee that met like they were supposed to, because I did look and you’ve had two years go by where your oversight committee did not meet.”

Dash ended her comments, noting that she thinks a similar measure may work, but that everyone would need to be pulled together to more thoroughly work out the details of a proposed tax increase. “My thing is public safety,” said Dash. “You have a measure that is supposed to take care of streets and roads, let’s take care of public safety.”

Also on hand during the meeting was past Mayor of Atwater Jim Price. Price began by sharing his thoughts on what a proposed tax increase that would make it past voters on a ballot might look like by recalling his time on the dais in October of 2017.

“If you want something that will work, here is something that will work. If you take the current Measure H and extend it out, and you decide 20 years, and put a time frame on it, do 20 years maybe 25 years or whatever you feel comfortable with. You’re getting $1.8 million, I believe was the last figure I heard of what you’re getting from Measure H funds,” Price outlined. “Do the same thing as with Measure H, put it in a five-person oversight committee, take those people and have them meet quarterly or maybe not a special meeting but prior to any major action or decision you might make.”

Price went on to say that the committee chair should then be coming before the City Council to report out prior to decisions to be made and have their report be given weight as they ready themselves to make their decision.

“If you want something that works, stick to your foundation with Measure H,” said Price. “If you can, get people behind a half cent tax and extend it out under the guidelines of Measure H with oversight and as a supplement to the General Fund as it is structured right now. Do that and you will get support. The way you’re doing it, I can tell you right now, it is not going to pass. And from what I understand they have already said that at the county.”

As the matter came back to the council, City Manager Lori Waterman led off the discussion. “The item before you was from a discussion at the last City Council meeting. Before you is a draft resolution that identifies that general sales tax. This is a two-thirds vote item for placement on the ballot, and also in your packet is a draft of what it would look like,” said Waterman. “This proposed tax measure would replace the current half-cent tax from Measure H which goes away in 2023. It is instrumental in the public safety budget, which is 59 percent of our general fund budget. The proposed 1 cent sales tax identified in the packet is a non-special tax which would be a general tax. If adopted the council would come back and establish a spending plan similar to the Measure H one we currently have in place and are meeting quarterly on and updating the expenditures in this.”

Council member Cindy Vierra was quick to voice her priority of ensuring police have what they need in order to complete their job successfully.

“My concern is public safety and I think that is what were going to see hit the hardest. So from my understanding we can’t allocate it all to public safety because it’s a general tax,” said Vierra. “I don’t know if a half cent is enough to put into the general fund and make sure that public safety still gets what they need and that is my main concern.”

Council member Danny Ambriz clarified that as it stands, the council was only able to address a general sales tax at the moment. “My understanding is the only way to get this on the ballot right now is for it to be a general tax and that even if we wanted to extend our current measure we couldn’t do that right now,” said Ambriz.

City Attorney Splendorio noted that, “If the council were to place onto the ballot a new tax measure, whether that be to extend the current public safety special tax or to put a general tax on the ballot, it would have to be a tax measure just because the existing special tax was placed and approved by voters. The voters would have to approve to extend its time or increase the tax rate.”

Council member Brian Raymond very clearly expressed his disapproval for the general sales tax increase, saying: “I think right now is very disingenuous and very harmful.” He went on to say that he sees the discussion to levy another tax among the residents as an example of government running to tax people as soon as the city runs into trouble, and at a time when many families are out of work or otherwise struggling during the COVID-19 pandemic.

Council member Vierra echoed these sentiments, expressing that it is currently a tough time but noted she was concerned about losing the funding sources for public safety altogether, and questioned if it was too late to attempt to get an extension for Measure V onto the ballot. City Attorney Splendorio responded saying that the deadline to submit ballot items is Aug. 7, and while he was hesitant to say it would be impossible to get a different item onto the ballot, he stressed that it would be a lot of quick work should they look to make it in time.

Ambriz expanded on these thoughts, questioning if it would be possible to push forward a middle ground at the ballot by “meeting residents in the middle” with a three-quarter cent sales tax to make it more palatable to voters while allowing for additional funding to make its way into public safety coffers.

Mayor Paul Creighton was the last to speak, and quickly stated that he was in agreement that now was not the time for the tax hike.

“Watching the Board of Supervisors vote down the tax, and with us potentially going for 1 percent to get us out of the perpetual financial devastation since 2008, dipping into the residents’ pockets isn’t probably the wisest thing to do. We as elected leaders were asked to come in and fix City Hall and we’re doing that. We’ve gone from being on a bankruptcy watch list for the city to working with Paul Navarro with the state of California,” said Mayor Creighton. “This council has dug deep and made a lot of cuts. It sounds like the residents of Atwater are asking us to continue to cut and so if there is going to be a future tax for residents we need to find out a lot more and make sure we do our duty. It is hard to do with a general sales tax because we can’t identify [where it will be spent], but it sounds like we’re looking for a public safety tax. So I think my view is this may not be the right time and the right place to do this, and citizens don’t want a tax right now so let’s not burden them with that.”

As Mayor Creighton finished his thoughts on the matter, he ended by declaring that he will “entertain a motion, and if we don’t get one it will die for lack of a motion,” before asking council, “One more time, any direction?” Following his question to council members, the subject of the tax hike would come to a close, failing for lack of a motion from anyone on the dais.

Virus surge continues while vaccine roll out is slow