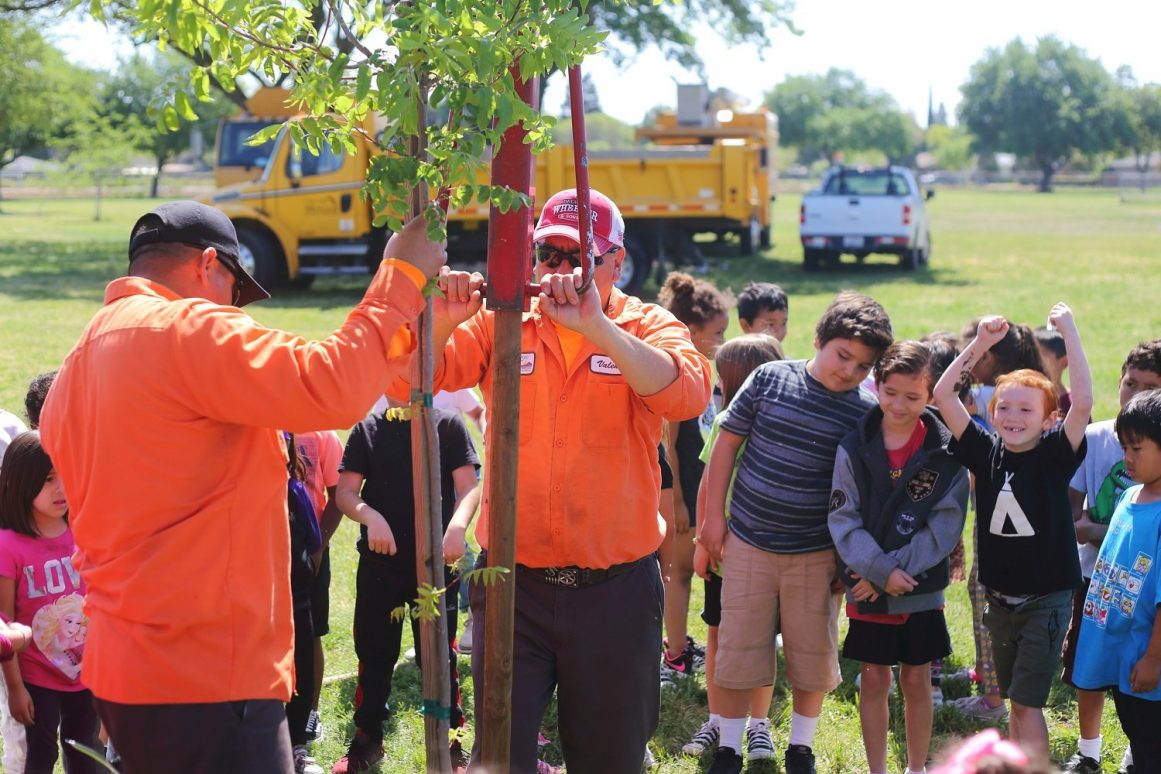 Children at Ada Givens look on as city workers plant trees outside of the school during an Arbor Day celebration in 2018.

It’s no secret. All you have to do is look around. Merced has an abundance of wonderful trees.

As a matter of fact, the city has enjoyed an official “Tree City USA” designation for the past 39 years. That’s a longer time with the distinction than quite a few popular destinations in California have held, including Anaheim, Beverly Hills, Oakland, San Diego, Santa Cruz and San Jose.

And consider the value: If the city had to replace every tree on public property — the ones along sidewalks, parks, etc. — it would cost nearly $120 million. Also, those same trees provide about $8.4 million in annual benefits to the community.
That’s just the public trees, not all the ones in neighborhood backyards and other private property areas.

Environmental consultants say for every dollar that the City of Merced spends on its trees, the return in benefits amounts to $3.67. Nevertheless, they also say trees are often overlooked and taken for granted when it comes to city investment and planning, and direct care by residents who play a critical role in the preservation of the city’s green spaces.

“Urban Forestry Management is not as sexy a topic as it really should be,” said Tina McKeand of the Davey Resource Group, during a presentation on Monday night to the Merced City Council. “Funding for urban forestry in Merced is pretty typical — it’s less than 1 percent of your overall budget. That isn’t a huge investment in a resource that’s providing you so many critical benefits. … It’s really important to engage the community [on the topic.]”

To that end, McKeand’s consulting group has been working with the city since September of 2018 to create an Urban Forestry Management Plan for city-owned trees. The plan includes an inventory of all the trees in the city, plus management goals for the next 8 years. The project was funded by a $470,000 grant the city received from CalFire in 2017. On Monday, members of the City Council unanimously approved and adopted the plan.

“We mapped all the trees in the city’s public and private areas,” McKeand reported. “So you know exactly where you have trees and where you have spaces to plant more trees. … It’s now part of the city’s GIS (Geographic Information System) files.”

Here are some highlights:

As far as Merced’s overall tree canopy goes — including public and private trees — about 12 percent of the city is covered with healthy branches and leaves. Over city parks, that number is about 30 percent, on average. Over residential neighborhoods, the number is 19 percent.

Creating a community effort to grow Merced’s overall tree canopy is one of the recommendations in the new urban forestry plan.

“We think with all the vacant sites, it would be probably reasonable to grow it [overall tree canopy] to somewhere around 15 percent,” McKeand said. “Just by planting those sites, and working with the community to plant more trees on private property, you would make a lot of progress toward that goal. It would be something reasonable.”

Another goal of the new forestry plan includes establishing “stable and predictable” budget funding — some of which was trimmed in the Great Recession after 2008. There were originally 10 city workers assigned to tree maintenance. Now there are only four, while there is funding budgeted for six.

The plan recognizes the city is “a little behind” on tree maintenance, despite ongoing quality work by a reduced staff. An 8-year maintenance cycle has been established to catch-up on all the revitalization work.

Before the plan was approved, the city did hold a community meeting on its forestry project, and a big topic of discussion was the protection and preservation of the eucalyptus grove on M Street near Merced College. That stretch of trees is considered a historic part of Merced with ties to local ranching and the famed Crocker-Huffman Land and Water Company.

“We don’t recommend preserving the entire stretch of eucalyptus,” McKeand said, “but choosing some sections that are in fairly decent health, and put a trail in there, and a way to explain the historical context.”

Public engagement on the tree plan also revealed a perception among residents that watering street trees in front of homes, especially during the drought, or dry years, is cost prohibitive. McKeand said her team did the math, and the cost perception is simply not true. “It’s a small amount and you should never exceed your base [water] rate,” she said. “Most people have only one public tree in front of the house. … You could potentially have four public trees, but even if you did exceed your base rate, it would cost about 74 cents a month.”

McKeand said the forestry plan encourages community engagement, including existing partnerships with Merced College, UC Master Gardeners, the Tree Partners Foundation and the Merced Garden Club. It recommends increasing the diversity of trees around town that will help overall resiliency of the tree population. Adding informational markers to the trees, and identifying the types of species that adorn pathways, will also promote awareness and tree enthusiasm among residents.

Mayor Mike Murphy praised the city’s new urban forestry effort and signaled the need for more landscape dollars, in addition to funding that has already been worked into refuse rates paid by residents and business owners.

Said Murphy, “I’d be very curious to know at some point soon what the plans are for the different parks we have across the city. We have been armed with very helpful information in terms of the tree canopy across the city. I think it provides an opportunity for us to make some bold investments now that we have some empirical data about how different areas of our city are doing.”