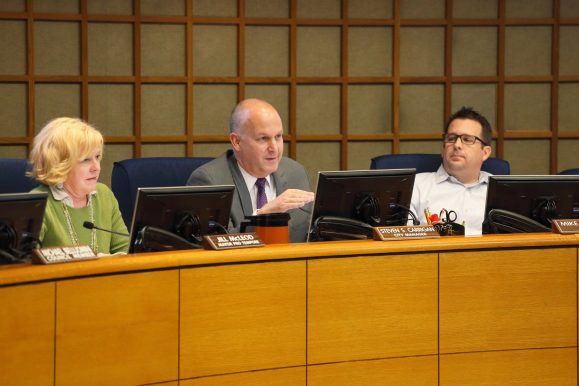 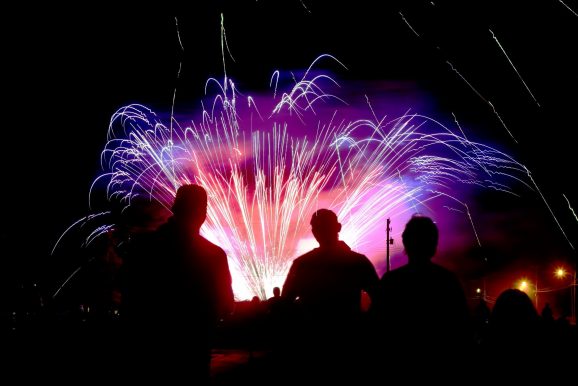 County residents gather to watch the fireworks display at an annual 4th of July celebration.

In the days to come, expect to see “a ton of public outreach,” according to Fire Chief Billy Alcorn, including signs on light poles, a big banner over G Street, pamphlets, social media posts and events.

It’s all to bring about awareness of using government-approved Safe & Sane fireworks and reducing the amount of illegal fireworks going off in the city — especially before, after and during the upcoming Fourth of July holiday.

The joint Fire and Police Department effort started last year due to the amount of reports jamming the city’s dispatch service and complaints from pet owners dealing with spooked animals. Sensitivity to local military combat veterans was also a concern.

Last year, police made several arrests of people trying to sell illegal fireworks, including online through sites such as Craigslist. Some people faces court proceedings and fines of up to $2,000. Also, a special dispatchhotline received more than 300 calls about illegal fireworks on the night of July 4, 2018.

To report illegal firework activity, officials say don’t call 911 unless it’s an emergency. Dispatch needs lines open for real emergencies, especially during the busy holiday season. However, there is a special hotline for tips that will be monitored daily, and by the minute this July 4. The number is: 388-SAFE (7233). Residents can also email tips to:[email protected], or use the Merced Connect app.

“We want people to enjoy the Fourth of July,” said Merced Police Chief Chris Goodwin. “We don’t want to rain on anybody’s parade, or anything like that. We want kids to have a good time, but always use Safe and Sane fireworks.”

Goodwin said to always enjoy legal fireworks outside, away from dry grass or flammable materials. Do not give fireworks to young children. Don’t point fireworks at another person. Have a bucket of water nearby, and use the bucket to soak used fireworks overnight. Last year, a structure fire was started when used fireworks were disposed of improperly near a building.

Goodwin also announced that the Merced Speedway is considering a big fireworks display during their annual event at the fairgrounds. The speedway has done so in the past.

More on that to come …

Is it a welcome sign, or a ‘plaza’ centerpiece?

What started out some two years ago as a good-intentioned effort to place welcome signs for visitors entering key entryways of the city — something other valley cities have, but Merced doesn’t — appears to be going through a downtown development wash.

The City of Merced administration continues to return to the City Council and insist on the idea that a Downtown Arch should be placed over what is currently the entryway to a parking lot located at 16 Street and a small strip of Canal Street that was left over years ago when Bob Hart Square was created on the other side of the block that faces Main Street.

The idea has been criticized in the past, including by Mayor Mike Murphy, as a poor site for a Welcome To Downtown sign because:

1) It enters a parking lot;

visibility from vehicle traffic; and 3) it’s just not a logical “entryway” for downtown.

But city staff — supported by Councilmen Kevin Blake and Matt Serratto — have a new idea, or perhaps an old idea to fit a new idea.

The plan now is to put a “welcome To downtown” arch at the site because the city is planning to build a new plaza there anyway — or someday.

In the plan: The old stretch of Canal Street, between two sections of the parking lot which also include the back entrances to Five Ten Bistro and Playhouse Merced, would transform into an inviting pedestrian walkway and a beautiful community gathering area.

Nice … but would this new archway really be an entryway to downtown — especially for new visitors to the city — or would it be a decoration for a new plaza where, quite frankly, Mercedians

would already know what to expect?

Says the City Manager Steve Carrigan, “I kinda made the joke around City Hall that if we get this one right no one will know our names, but if we get this wrong our names will live in infamy.”

Mayor Murphy seems to have softened on the arch location idea. At Monday night’s City Council meeting the mayor said he would support the Downtown Arch location if indeed a plaza was built. The other council members appeared to agree.

So what comes first: the plaza or the arch? … That is the question. If they build the arch first, it’s going to be over a parking lot entryway.

The mayor did manage to push for the prioritization of sign designs for the northbound Highway 99 / Campus Parkway overpass, and a sign at the 16th Street entrance off of southbound Highway 99. Those are supposed to be still under consideration by the Arts Commission.

The city is also considering placing a version of an old arch that used to grace 16th Street with the words “Gateway To Yosemite” somewhere — perhaps along Highway 140 to the east.

By the way, according to a city-paid consultant, a downtown archway has an estimated cost of $270,000. The total cost for signs in all specified locations would be somewhere around $400,000.

The Finance Department is currently considering options to close a projected $70,000 General Fund deficit to balance the budget this month.

City Council members considered three options, and then directed staff to pursue a solution using two of them: Moving police and fire funds back into the tax-payer funded Measure C flow, and putting a temporary hold on some vacant positions including a Fire Department Battalion Chief and a Street Trees Supervisor.

City leaders had been thinking of trying to wean off reliance on Measure C which faces a sunset scenario, however, the plan now is to go all-in on another ballot measure to keep the funds flowing to support the city’s police and fire services.

The most recent budget moves will also help ease a $40,000 below-the-line expense for something Mayor Murphy has been pushing for: A new youth center at an old city building located at 27th and K streets.

The total City budget is $255 million, with staffing staying at current levels. The complete preliminary budget is online and available at: cityofmerced.org.

A second public hearing on the budget will be held June 17.

A trio of homeowners spoke up at the public comment period of the City Council meeting regarding the ongoing homeless situation and quality of life issues at Applegate Park and Stephen Leonard Park in Merced. There was also a presentation about youth activities being developed at McNamara Park.

Stay tuned as the Times investigates these issues in upcoming editions.

Last but not least, Fernando Aguilera, president and founder of the Merced Soccer Academy, addressed the City Council to clear up some rumors, and questions brought up in previous meetings about a city review of his organization’s nonprofit status to run the youth and family center at Stephen Leonard Park.

“I’m glad to show you and confirm that the Merced Soccer Academy always does the right paperwork and follows the law. … The IRS sent us a letter saying the error was on their end. … Thank you for trusting me, and believing in the Merced Soccer Academy. You guys gave us plenty of time to fix it. We also want to give a special thank you to one man who always supports us, who always believes in us, who never questioned us, and always works for his community — District 2 Councilman Fernando Echevarria. …

“Also on May 22 we met with City Manager Steve Carrigan and Parks and Recreation Supervisor Joey Chavez and it was a positive meeting … It made me feel so good. And the comment you made that we should now ‘Let’s push the reset button.’ … We are here with coaches, parents and young players, and I want to invite everyone from the community … to make this move together for the benefit of the community and the city. … Let’s all push the reset button.”