Chief gets OK to pursue plan for expansion of police station

City Hall would be transformed in process 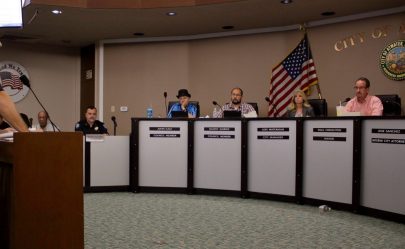 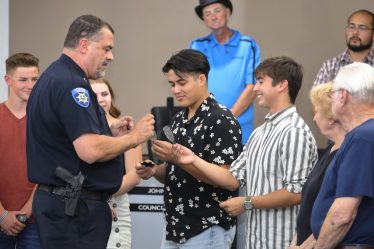 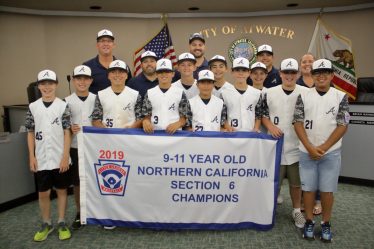 Public safety was a common theme throughout Monday night’s meeting of the Atwater City Council.

From discussing the proper procedures that would begin in the event of a natural or man-made disaster, to the initial steps in a large scale modernization of City Hall, the marathon meeting covered a lot of ground as the council and mayor worked to ensure their residents would be properly protected in a wide variety of situations.

Atwater Police Chief Michael Salvador spoke in straight-forward words as he revealed the city’s police facilities were in need of a major overhaul.

According to Salvador, when considering the age of the current police station and materials used — namely asbestos — the expense of repairing, renovating, and correcting shortcomings present throughout the building as outlined in three grand jury reports and a report from the California Department if Justice, the final figure begins to grow quickly.

As such, the chief asked council members to approve the creation of a conceptual plan to look into the development of a new Civic Center Complex that would bring together City Hall, numerous city departments such as public works, financing and city council, as well as a police and fire station.

“Tonight is the biggest night in the police department’s history for the last 50 years, and I’m going to tell you why,” Chief Salvador began. “The current City Hall was constructed when I was 3 years old. …The city of Atwater was 12,000 in population, and the police department was about 12 guys, and it was part of a larger plan to make a Civic Center on this property but that plan was never completed.

Chief Salvador went on to explain that he would like to see the current property that City Hall sits on utilized for the project, and cited land acquisition as one of the most expensive aspects of a development project followed by utility infrastructure construction.

With two major hurdles out of the way, and coupled with a lease to leaseback financing option that was used in other cities construction of police stations without the need for special taxes or bonds as part of Chief Salvador tenure, he went on to express his recommendations.

“We’re large enough to do a one-stop shop,” Chief Salvador said. “We have the land to do one-stop shop, and so the one-stop shop is, in my professional opinion, the way to go. It will make sure you have plenty of contact space for police, fire, Public Works, planning and development, and more.”

He went on to drive the point home by noting that due to the building’s age and variety of issues and law requiring that it be brought up to current code as the repairs are made, costs associated with simply renovating the current building would climb towards the $5 million dollar mark but would be unknown amounts that would have to be paid at the time of the works completion. This was then contrasted with the lease to leaseback financing option in which a developer selected from a bidding process builds the new complex to the city’s specification, for a known amount and taking on the responsibilities and role of a landlord, would then lease the building back to the city upon completion for a regular amount per year. Chief Salvador expressed that he found having this known amount would be easier to account for as it would entail a flat cost to be accounted for in the yearly budget talks.

Following the chiefs presentation regarding the final agenda item of the night, council members brought discussion back to the public and dais. While some members of both the council and public expressed concern over the City of Atwater going from their current standing as owners of both the land and building in which City Hall and the Atwater Police Station occupy, all generally acknowledged the need to bring their public safety systems up to date in order to assure the City of Atwater’s continued effective policing.

As council members took in public comments and Mayor Creighton called for a motion, the ultimate decision was made unanimously to approve Chief Salvador in taking these initial steps to begin drafting a conceptual plan detailing how City Hall and the police station at 750 Bellevue Road could be best brought into the 21st Century.

Getting ready
for the big one

CalFire Division Chief Jeremy Rahn, Battalion Chief John Slate, and Battalion Chief Dave Scheurich took to the podium on Monday night to go over the details of the Emergency Operations Plan and the roles taken on by elected and appointed officials in the event of a large scale emergency.

Called upon in response to the recent earthquakes and past events such as the overturning of a gas tanker near the Applegate overpass, the trio of fire chiefs outlined the ongoing processes that are in place and those that would begin if tragedy strikes.

At regular intervals, locations throughout the community of Atwater, such as places of worship, community centers, and large institutions, are taken stock of as officials work with those running organizations who are willing to open their doors should the city have a need to call upon them. In addition to keeping track of both city buildings and resources that can be used to house those in need, the various resources and capabilities of private organizations are accounted for as well. At this local level, local officials work to address the needs of the public with the resources and skill sets available to them.

Should the emergency continue to escalate or otherwise become larger than what the City of Atwater is able to take care of either financially or in terms of capabilities, City Manager Lori Waterman can appeal to Merced County. With a greater reach than the city and with more resources at hand, the county would begin to look to cities throughout the region to pull in what is needed to aid the situation.

As needed, Waterman would need to continue to declare the city’s need for help for the duration of the emergency. The chiefs explained that should the county’s abilities to handle the emergency become strained, the state, and finally the federal government would become involved to render addition assistance.

During the presentation of the Emergency Operations Plan, a particular emphasis was placed on adhering to proper accounting of what was needed and how it was used. As additional aid and resources are brought in, the accounting of used resources is of particular importance in order to have the reimbursement of expenditures take place in a smooth and effective way.

Mayor Paul Creighton called for a special ceremony to take place in front of the dais at the start of Monday night’s meeting.

Two young Atwater residents, Everett Estrada and Jacob Alvarez, were recognized for their quick thinking and good moral character as they risked injury to alert their neighbors that a fire was taking hold around their properties on May 27.

Estrada and Alvarez noticed that a fire was beginning to quickly spread and immediately began making their neighbors aware of the impending danger and the need to quickly make their way out of the home. The two saved families were on hand during the ceremony and thanked the duo for notifying them and helping them safely exit their homes before the fire took hold, leading to a situation which would have been much worse.

Chief Salvador presented the two residents with a series of special gifts of gratitude.

“From the Atwater Police Department, we have a little token of our appreciation for your actions that wen way beyond the call of duty.  So what I’ve got for you is a little care package this is a simile of the star and then I’ve got two historical patches from the police department.”

He went on to present the two residents with a Challenge Coin, which is given to those who have given an exemplary display of heroism or other special achievement beyond what is expected.

Be aware, get ready for the mother of all elections