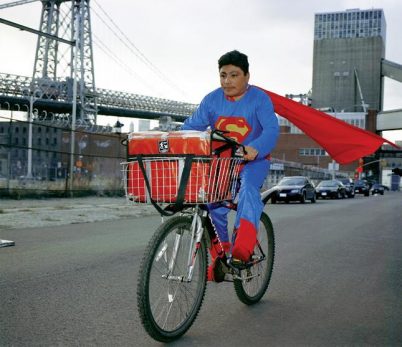 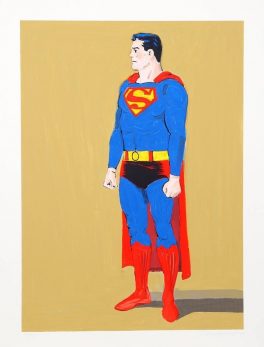 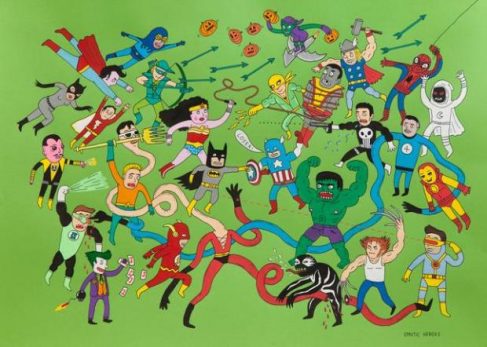 The touring “My Hero: Contemporary Art and Superhero Action” will open at the Carnegie Arts Center in Turlock on Sept. 14 and run through Jan. 12. A art panel discussion is also planned on Sept. 22.

My Hero! re-envisions the significance of the magic cape, lasso, or superhuman powers and the expectations that come with them. Organized by the Bedford Gallery, Lesher Center for the Arts in Walnut Creek, the exhibition has made a strong impression all across the country.

Bedford Curator Carrie Lederer says: “For decades, artists have tapped the world of the superhero, eager to explore the alluring concept of what it means to have an avatar. We’re captivated by miraculous, superhuman strength, startling bravery, the enthralling adventures, and even their weaknesses.”

In their work, contemporary artists have challenged the traditional notions of what a superhero is and what they represent. The exhibition explores a variety of interpretations in images ranging from comic to tragic, posing questions for the viewer about pop culture, patriotism, heroism, and the human experience.

Sacramento artist Mel Ramos anchors the My Hero! exhibition. A Pop-Art pioneer, Ramos has been using iconic superhero images in his work for over 50 years. One of his earlier works, an oil painting of Superman (1962), is currently on display at the de Young Museum in San Francisco. My Hero! includes a limited-edition woodcut based on that oil painting.

My Hero! also features art by nationally renowned artist Mark Newport (Keego Harbor, Michigan), who has long been using superhero imagery to explore issues of identity and the definition of “hero.” Newport says about his work: “Turning the superhero inside out is a way for me to present an understanding of masculinity. Superheroes suggest strength, but knitting them or covering them with embroidery provides a softness that is contradictory to their image.”

Dulce Pinzon’s (Brooklyn, NY) photographs depict immigrant workers as society’s “real superheroes.” In them, Catwoman works as a nanny, and Superman delivers pizzas on his trusty bike. Their ability to withstand extreme working conditions often go unnoticed but are highly depended upon.

Other artists present the superhero as a pop culture god, an aging has-been, a film noir anti-hero, and a symbol of commercialism.

My Hero!’s international roster of artists includes a series of humorous, sardonic superhero paintings by Laurina Paperina (Rovereto, Italy) and a sultry rendering of Supergirl laying across Mount Taranaki by Graham Kirk (New Plymouth, New Zealand) that is both dramatic and comic.

The Carnegie Arts Center is located at 250 N. Broadway in Downtown Turlock. The exhibition opens to the public on Sept. 14, and will be on view through January 12, 2020. Admission to the exhibition is $7 general, $5 for seniors and students, and free for Carnegie members and children.

Programming for the exhibition will include field trips for students in grades 4 and up, focusing on the role of superheroes in our culture and how artists represent action through the use of color and line.

Also scheduled are a panel discussion on Sept. 22 at 2 p.m. with four of the artists in the show, Robert Xavier Burden, Bill Concannon, Hannah Rothstein, and Matt Ritchie. They will discuss what makes superheroes awe-inspiring and captivating in our culture.

• Robert Xavier Burden: Robert Burden’s labor intensive oil paintings take over 2000 studio hours to complete. The patterns he paints behind his figures are inspired by patterns from Gothic stained glass, French tapestry, and Eastern mandalas, and more. His work has garnered much attention over the years, resulting in interviews with The Chicago Tribune and ABC News. His work has been featured in Gregorio Escalante Gallery in Los Angeles as well as the San Diego Comic Con.

• Bill Concannon: Bill Concannon started working with neon in 1973. He opened his own business, Aargon Neon about two years later. There he makes hand-crafted neon signs, sculptures, and special effects for various films such as Howard the Duck (1986) and Zodiac (2007). In 2010, Concannon exhibited his work in a solo show at the Museum of Neon Art in Glendale. He continues to teach at the Academy of Art University in San Francisco.

• Hannah Rothstein: Hannah Rothstein paints in watercolor and acrylic. Her artwork, such as Mr. and Mrs. Politico and National Parks 2050, expresses issues and concerns of the millennial generation. Although Rothstein’s artwork has been featured in The New York Times, TIME, The Guardian, and Vogue Italia, she makes her work relatable, comprehensible, and easily accessible. Thus, she also releases her work online and via social media.

• Matt Ritchie: Matt Ritchie hand-carves wooden sculptures and paints them in acrylic. He often depicts pop culture icons, but he creates figures from his own imagination. Most of the sculptures are no larger than the top digit of a finger. He also well known for his Bay Area Toile, a wallpaper depicting famous Bay Area natives and landmarks. Originally exhibited in Athen B. Gallery in Oakland, now the San Francisco restaurant, Fiorella displays it, attracting many tourists.

• The Carnegie has also scheduled a superhero-themed fundraising event in October. The Carnegie’s Superhero Soiree takes place on Saturday, Oct. 19, from 7-10 p.m. he event will raise funds for the Express Yourself! Justin Ferrari Youth Arts Fund; this special fund, dedicated to the memory of Justin Ferrari, provides support for a variety of youth-oriented activities and events at the Carnegie, including scholarships for art students, subsidies for youth arts events that utilize the Arts Center, and school buses for field trips. Tickets for the Superhero Soiree are $50 for CAC members, $60 for non-members and will go on sale in August.

‘The Underpants’ on show for all to see at Prospect Theater