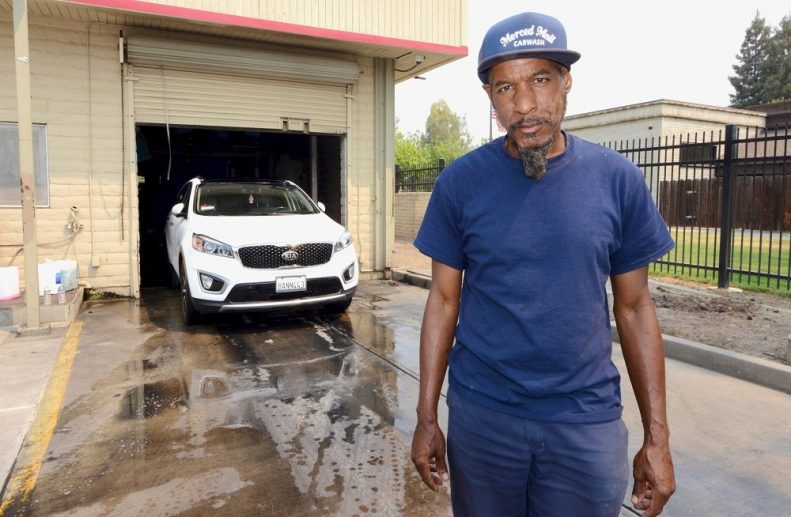 Craig Bledsoe stands outside the Merced Mall Car Wash where he has worked for 35 years. 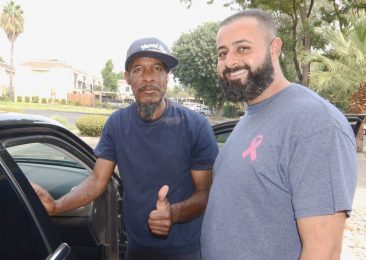 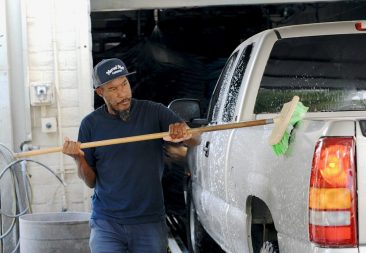 Bledsoe is part of an entire crew that offers hand-wash care.

If there was a Car Wash Hall of Fame in this area, Craig Bledsoe would most certainly be a member.

Bledsoe has been working non-stop at the Merced Mall Car Wash for the past 35 years.

“He’s never late. He’s never not shown up. He’s never called in sick. … He’s awesome. He’s the best. There’s nothing mad, sad or upset you can say about Craig.”

If you ask Bledsoe, he just smiles like a dude who feels lucky to have an enjoyable job.

Busy is an understatement. Even during the COVID-19 lockdowns, Bledsoe was showing up at the shuttered car wash to see if there was anything he could do to spruce up the place.

Now that the car wash is back spinning in full cycle, Bledsoe is working as an all-around car washer for at least one shift every single day of the week. He’s part of a daily crew of about 12 entry-level workers at the full-service, top-quality location.

Let’s say, over the course of his career, Bledsoe has helped clean an average of 10 cars an hour. And that’s a conservative estimate considering the Merced Mall Car Wash can easily usher in about 200 cars on a sunny Saturday. So that would mean (somewhat loosely calculated), he has helped vacuum, scrub, rinse, dry, wax and detail more than 672,000 vehicles.

Bledsoe was born in Los Angeles, but his family moved to Atwater when he was little. He says his parents were looking for a safer place to live and better schools for him and his two siblings, a brother and a sister. He went to Mitchell Elementary and Junior High, and then Atwater High School, graduating in the Class of 1984.

From the start, Bledsoe says he wanted to get a good job and avoid some of the troubles he saw other young adults getting into at the time, including drugs. His mother, Lynda, gladly helped him find a job. And he remembers by heart the exact date he first got hired at the car wash.

That was back when the Mall had a record store, a book store, an “Orange Julius,” and the back lot was nothing but parking spaces that led to the car wash and a fire station. There was no such thing as a “Target.”

So Bledsoe drove down to the Mall in his beloved car — a 1967 Chevrolet Caprice.

“They hired me on the spot,” he recalls. “They liked me.”

“They” were the original owners — Elke and Arnold Vandenberg — who started the car wash back in the 1970s.

Bledsoe started out making $3.25 per hour. And he learned to do everything. And perhaps more importantly, he proved he didn’t need much supervision. He got things done.

Eventually he moved to Merced with his parents. When his father and mother passed away, he moved to an apartment with a family member. It’s close by the car wash, so he can walk to work now with ease.

These days Bledsoe is making more money as a senior employee, and that helps him maintain his hobby of working on classic motorcycles. He has five motorcycles, including some sweet Harley-Davidson models, and a custom chopper. And he still has the ’67 Caprice. It’s currently at Rich’s Auto Body being restored.

After 35 years, Bledsoe has made quite a few friends among the customers that come in for a custom car wash. Some have been coming in since he first started. One time, a guy pulled up in a Cadillac, saying he had a brother who used to work at the car wash. He told Bledsoe he would get a tip if he did a good job. Later the man handed Bledsoe a big roll of $1 bills that added up to $100.

Though it’s not often, Bledsoe has taken some extended time off in the past. He likes to go up to Klamath Falls, Oregon where he has friends. He says he can’t imagine ever retiring. But if he did, he would probably like to move to the small, picturesque town of Lakeside, Oregon, where he could go fishing, ride his Harleys and work on classic cars.

“Thirty five years is a long time,” he says looking back at the car wash. “I’ve been working all my life.”

If you are reading this and have never taken your car or truck to the Merced Mall Car Wash, you should give it a try. It’s considered a high-end car wash, where owners get out of their vehicles and let the crew do the dirty work — including vacuuming interiors, washing and waxing, drying by hand, and even custom detail work.

And don’t forget to say hello to Craig Bledsoe.