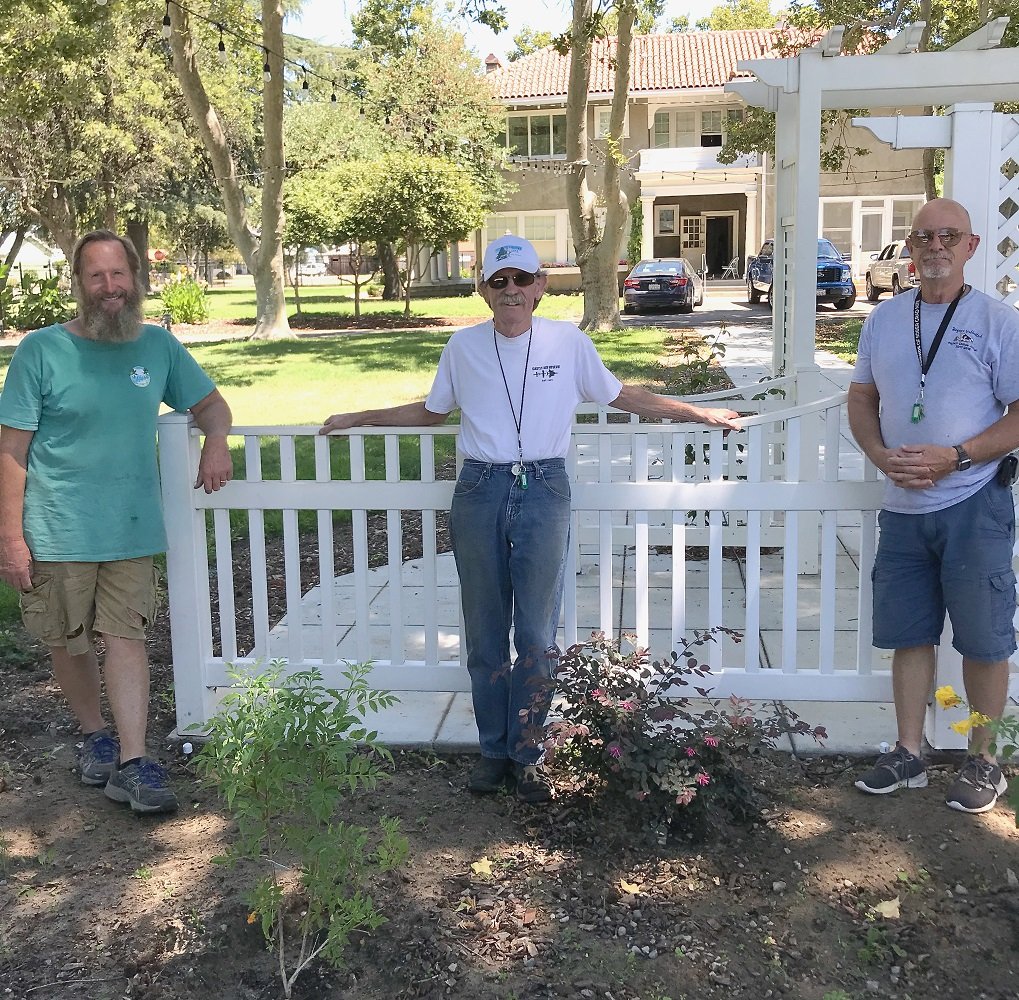 Greg Olzack, Norm McIver and Jim Vineyard enjoy maintaining and beautifying the Bloss Home grounds. They are asking community members to help out by participating in a group Work Day

Jim Vineyard, Atwater’s former mayor pro tem who is currently outgoing vice president of the Atwater Historical Society (AHS), has spent several years of his time maintaining and improving the Bloss Home lawns, trees, flower beds, and outdoor structures, but he is tired and needs some help.

The Bloss Home is a great treasure in the City of Atwater that everyone loves, but most people in AHS do not have the physical ability to do the necessary grounds upkeep.

The exquisite house, which was willed to the City of Atwater by George Bloss, Jr., has been maintained by AHS, which was formed in 1972.  At that time, the city was responsible for the upkeep of the grounds.

But in 2018, when the City of Atwater was unable to put in the necessary time due to lack of resources, AHS took over the grounds’ upkeep and in return, it was allowed to keep the revenue from its rental by the community for fundraisers and other events.

That’s when Vineyard became involved as a volunteer handyman, along with his wife and co-volunteers Norm McIver (AHS vice president-elect) and Greg Olzack (AHS president).

The Vineyards and their friends have made many improvements, including restoring a much-loved fountain. More recently, they reorganized items in the tank house, put up new cables and re-strung lights above the garden, and Vineyard just finished creating shelves in the downstairs basement.

He told the Times, “I started out working on the grounds one day a week, and now I’m up to three or four days a week.

“The lawns need mowing on a weekly or bi-weekly basis.  It takes three hours with a riding mower to mow the lawn because you have to take it slow.

“Limbs falling from the trees need to be picked up, and there is also weeding, raking, sweeping and edging.

“The sprinkler system needs constant maintenance.  This morning, I fixed three sprinklers.  They clog and break down.  The sprinklers are being operated manually right now because I’m waiting for some parts.”

Vineyard, Olzack and McIver have been enjoying spending time together, but the work is becoming too much, so they are calling for the formation of a group clean-up crew on a monthly basis, as well as the donation of materials like mulch for the flower beds and paint to repaint the fence.

One of the most interesting responsibilities of the new crew would be to care for the Monkey Puzzle Tree.

The towering Monkey Puzzle Tree (Araucaria araucana), a majestic and exotic evergreen, intrigues visitors to the Bloss Home premises, and will be one of the inhabitants that needs the most care.

Vineyard said, “It’s a historical tree because there are so few in the world.  The Monkey Puzzle Tree has branches that are sharp.  Limbs 10 feet long have fallen and need to be cautiously picked up and removed, but you have to be careful not to be hit.”

The tree is native to the high altitude dense forests of the Andes Mountains in Chile and Argentina and is rarely seen in the United States.  This specimen was brought to Atwater by George Bloss, who wanted the striking tree to be part of his collection.

In its native habitat, it can grow to 130 feet, but in gardens it grows to around 50 feet tall.  The leathery leaves have a sharp point and because of the way they are wrapped around the stems, their appearance creates the impression of a strange snake.

The tree has an interesting history.  It was introduced in England in 1792, and its second introduction in the 1840’s resulted in it becoming a popular garden tree seen around mansions.  It was named the Monkey Puzzle Tree because it would be a puzzle for a monkey to climb, since it has spiny branches.

Vineyard, Olzack and McIver told the Times, enthusiastically, “We’re hoping that people who enjoy using certain skills they have developed will have fun on the various projects to keep the Bloss Home grounds looking beautiful.  There are big and small project we need help on, one of which is putting up the screens and working on the windows which were painted shut, so we can open and air out the house.  We also need help to sand and paint the fence posts, which are black, and some help unclogging the drain pipe inside the carriage house and the one leading from the fountain.”