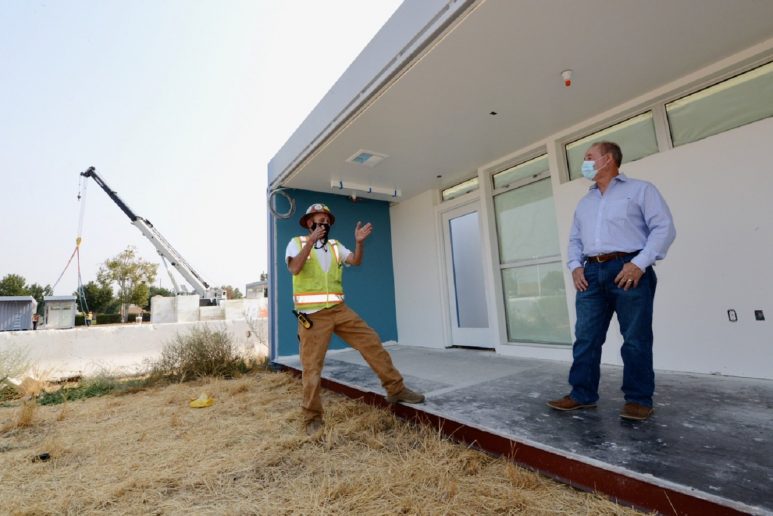 County Supervisor Lloyd Pareira speaks with a construction worker on the porch of an installed modular unit that’s part of the 15,000 square-foot facility that will help address homelessness in the region. 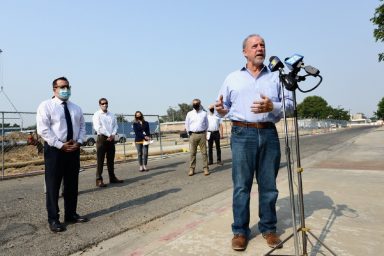 Merced County Supervisor Lloyd Pareira speaks to members of the media as Merced Mayor Mike Murphy, Merced County CEO Jim Brown and other officials look on during a tour of the construction site for the new Navigation Center in south Merced. 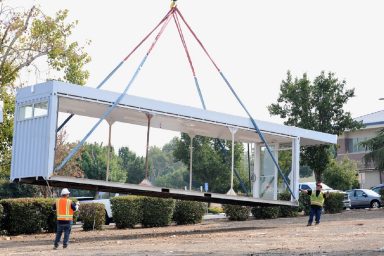 Construction workers prepare a modular unit — created from a modified cargo container — for placement at the Navigation Center that’s under development at 1411 B Street in south Merced. 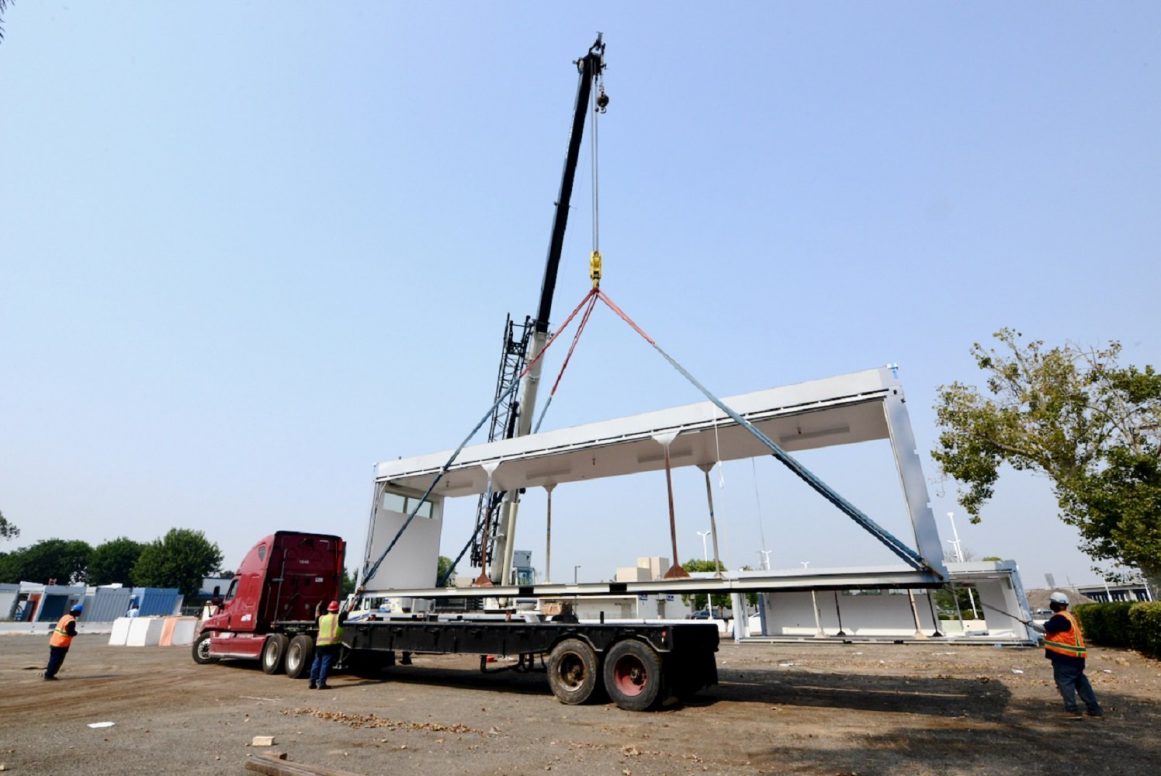 Construction workers prepare a modular unit — created from a modified cargo container — for placement at the Navigation Center that’s under development at 1411 B Street in south Merced.

Merced County leaders did not want to waste any time getting the new Navigation Center up and running in south Merced. In January, they said they wanted it built quickly, efficiently, and with an affordable price tag.

After all, they had state funding in hand, unprecedented cooperation with the city of Merced and area nonprofits, and of course, the clear and present need to implement a new, effective resource to address the homeless crisis in the region.

Today, they are getting what they wished for: The $6.48 million construction project is in full swing despite the COVID-19 pandemic that hit in late March and rocked everything off balance.

“We feel like we shaved a year and a half off this project by going to a pre-engineered, pre-approved model,” said Supervisor Lloyd Pareira, one of the main supporters of the project.

Construction crews have begun placing modified cargo containers — an innovation created on contract by a Southern California company — at the corner of 13th and B streets, where the old Juvenile Hall used to be located. About 48 of those containers will be joined together to create a 15,000 square-foot facility that is expected to serve as a pet-friendly emergency shelter and life-changing resource center for individuals currently living on the streets, under bridges and behind bushes all around town and beyond.

The whole thing is expected to open in mid-November or early December.

“We have a passion to help the homeless,” Pareira said during a tour of the site this week. “We believe that this site will allow that to happen. Instead of them being in camps all over the area, they can come here and be centrally located. That way case managers will know where to find them and be able to help them and work with them. Our goal is to first, get them into the low barrier shelter; and second, would be to help them get their lives back together. Workforce Investment will be engaged in here, as well as, Behavioral Health and HSA, and then the nonprofits.”

The facility will include 75 beds, plus a full-service kitchen and dining facilities, laundry, classrooms, a health clinic, and office space for support service providers.

The Merced County Rescue Mission was awarded the contract to manage the facility which is expected to have an annual operational cost of $1.78 million.

The mission has announced that Jennifer Carr will be the new director of the Navigation Center. Erin Thomas was named Housing Navigator.

There are about 600 homeless people in Merced County, officials say, with about 300 of those folks already in some sort of shelter.

“Homelessness is a top priority in the City of Merced and has been for some time, also county wide and region wide,” said Merced Mayor Mike Murphy. “So this is one important step. There’s not a silver bullet to ending or reducing homelessness, but it’s these thought out, intentional steps that together make a difference.”

From September through November, the Rescue Mission will be posting job positions on its website: mercedcountyrescuemission.org. If you would like to submit a job application for one of these positions, please mail it to Jennifer Carr, P.O. Box 3319, Merced, CA, 95344; or email her at [email protected]