Outdoor dining along Main Street is a new feature for guests of the Bella Luna Restaurant.
BusinessLocal News

New owners share same passion as restaurateur who started it all

Giancarlo DiTullio and Anaid Martinez-DiTullio were meant to be.

They’ve spent most of their lives in a serendipitous world marked by happy coincidences and beneficial twists of fate.

They both grew up in the restaurant business. They both found romance, love and marriage much like their parents did. And they both discovered, working side by side, that their true passion is food, hospitality and the overall dining experience.

Oh, they tried to fight it. In their own ways.

At one point, Giancarlo pursued a career as a commercial pilot. He says he still dreams of flying.

Anaid loves videography and filmmaking. She’s attended community college to learn more about it, off and on. She even worked in the field for a time.

Yet, like the gravitational pull that keeps the Earth and Moon in line, the two kept being drawn to each other, and what they both like doing the best.

The attraction went on and on until they finally made it to Merced where they discovered a restaurant with a name they knew all too well.

“It definitely hit home when we saw this place called Bella Luna,” Giancarlo says. “It was a meant-to-be type of feeling, you know.”

Giancarlo DiTullio was born and raised in San Francisco and went to local schools, including Sacred Heart Cathedral Preparatory. He was the son of a restaurateur, Richard DiTullio, who once had a pizza place in Boston, by the name of Georgio’s, and then moved it to San Bruno. Richard would end up meeting his future wife Paula at the restaurant. She and her mother would come in to pick up pizzas. It was love at first sight. They got married, and then both were working at the restaurant.

Later, Richard would manage another pizza parlor in the Bay Area called none other than Bella Luna. That’s where Giancarlo got his first start as a young boy folding pizza boxes and helping to prep dough. Later, as young man, he attended San Jose State University. He intended to go into aviation, but then a friend urged him to pursue a hospitality degree because of his likable personality and social skills.

During his senior year in college in 2014, Giancarlo landed a job working special events at the impressive Michael Mina Bourbon Steak and Pub complex that had just opened at the base of the new Levi’s Stadium in Santa Clara. It was the start of a fast-moving career that included food and drink service and ultimately management experience through a string of distinguished Bay Area establishments: Straits on Santana Row, True Food Kitchen, Il Fornaio, and Bird Dog.

However, Mina’s complex at Levi’s Stadium held a special place in Giancarlo’s heart. It’s where he received some of his first restaurant management experience. It’s where he coordinated with 49ers management teams and Silicon Valley executives.

It’s where he worked Super Bowl 50, and rubbed elbows with celebrities such as Beyonce and Jay-Z, and Stephen and Ayesha Curry.

Anaid Martinez was a server at the same steakhouse and pub complex. Giancarlo noticed her walking by right from the start. He nudged a friend and said: “That’s the kind of girl I would marry.”

It may have been love at first sight, but it took Giancarlo nearly two years to finally ask Anaid out.

Long story short: They were both 23. She said yes. They went out for pho. She taught him how to use chopsticks. They started dating.

Anaid — or as she points out ‘Diana’ spelled backwards — was born in Guadalajara, Mexico, and came to the States as a young girl.

As a young adult, Anaid also followed the hospitality path — first in the hotel and tourism industry, and then later through an extraordinary list of fine restaurants in the Bay Area.

Yes, she studied cinematography at De Anza College, and worked in multimedia production for Silicon Valley Bank; but she always managed to serve, serve and serve.

It was at the latter restaurant, Naschmarkt, where Anaid’s life took another turn for the better. They were celebrating the birthday of her father, Sergio, and the whole family was there eating and drinking. The restaurant manager even showed up with a special glass filled with fine Champagne; however, he presented it to Anaid. She thought the manager forgot it was her dad’s birthday, so she got up to deliver the glass when she noticed Giancarlo had dropped to his knees.

“I immediately started crying,” she recalls.

Giancarlo had already asked her father for permission. Says Anaid: “It was important that my family was there.”

The two planned a wedding right away and settled on Oct. 25, 2019 when a location became available. They didn’t realize it at the time, but that’s exactly the date when Giancarlo’s parents were married.

“Are you kidding me?” Richard DiTullio told his son Giancarlo when he found out.

Five months later, the pandemic hit and rocked the Bay Area restaurant scene, as well as everywhere else.

Both Giancarlo and Anaid worked hard in the transition, helping their restaurant establishments convert to take-out menus and create special at-home culinary kits. Unfortunately, they could not escape being eventually furloughed.

It wasn’t so bad. They were newlyweds after all. And they found themselves spending every day and night together and becoming closer than ever before.

Fortunately Giancarlo had already stepped into a side career in commercial real estate, specializing in the sales of restaurants, bars and clubs. Real estate is also something his dad Richard went into after his long career in the restaurant industry.

And it was Richard who saw the name Bella Luna in Merced, and found out that the longtime owner, Vinnie DeAngelo, was retiring from day-to-day restaurant management.

Richard told Giancarlo, who was already contemplating the idea of finally owning his own restaurant. It was time. So they set up a private meeting with Vinnie.

“Vinnie was a big reason why we decided to do this,” Giancarlo says. “We went for a tour of the place, and there was an instant connection between me, Anaid, my father and Vinnie. …

“Vinnie loved our story. He has the same passion in the food industry as we do. He loved how we wanted to continue the Bella Luna tradition, and continue offering the Merced community the Bella Luna experience. He loved the story about my dad’s old pizza place with the same name.

Giancarlo adds, “It all came together perfectly. It was a dream come true.”

Anaid admits she was pretty apprehensive at first to invest in their first restaurant, especially during a pandemic. And they are only in their early 30s. However, upon her first visit to Merced, she was like “OK … I see it now … Let’s do this!”

The couple did market research. The read about the downtown development going on. They studied up on the university’s growth. And they liked the idea of being part of a world famous agricultural community.

Simply put, they soon realized they wanted to be a part of Merced.

Says Anaid, “When we were here visiting, we went down Main Street to check things out. Everyone was so friendly. We can’t speak highly enough about everyone we met around town. The people are truly warm here. They are kind, genuine and welcoming, and that really matters for us. We are falling in love with this city.”

The deal went through, and the DiTullios made sure to keep the Bella Luna staff on board. Server Kerry Brooke, who goes back 24 years to when Bella Luna was once called The Wine Cellar, is still working. Bartender Billy Pedrozo is serving up cocktails. The chefs in the kitchen are all the same.

The new owners want locals to know that some of Bella Luna’s signature dishes — like the crab ravioli — will remain on the menu, along with some new surprises.

“There is such real history within these walls,” Giancarlo says. “We feel fortunate to be part of it.”

Bella Luna now also outside dining along Main Street, to go along with two indoor dining areas, a full bar with tables of its own, and a banquet room fully equipped for private events. A new Bella Luna sign has been designed and should be up above the restaurant this week.

Richard Ditullio has already relocated to Merced, and Giancarlo and Anaid are on their way to finding a place.

Says Anaid, “We have talked a lot about this feeling that we are inviting people into our new home, but we already feel like people are letting us into their home. … We are excited to meet everyone. Please come and visit us.” 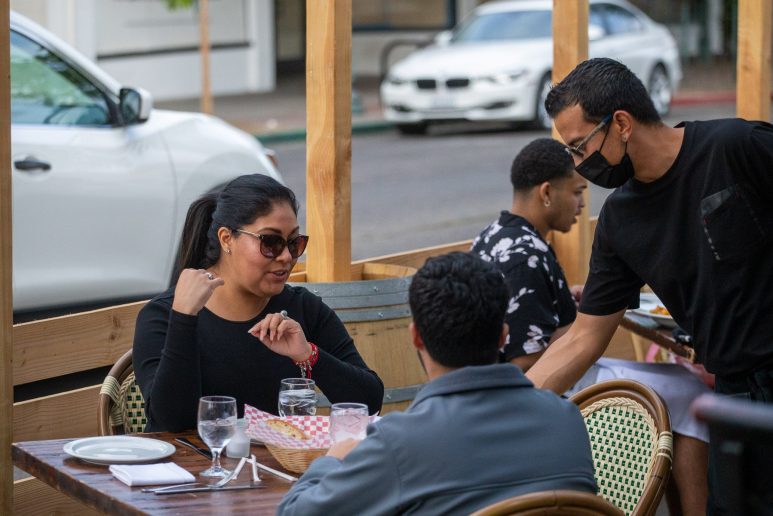 Outdoor dining along Main Street is a new feature for guests of the Bella Luna Restaurant. 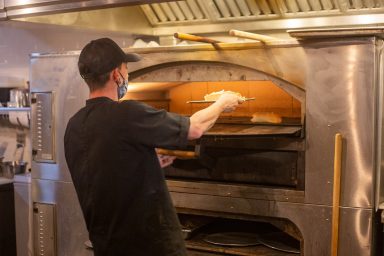 The Italian oven at Bella Luna continues to warm up culinary delights. 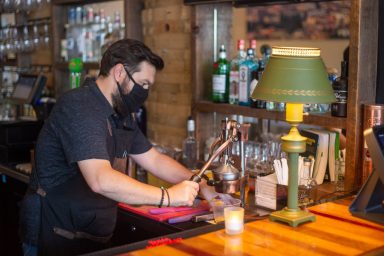 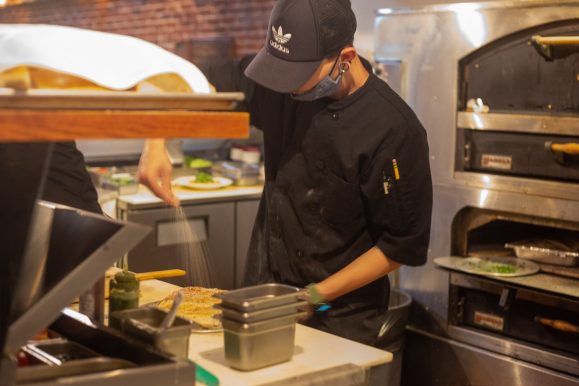 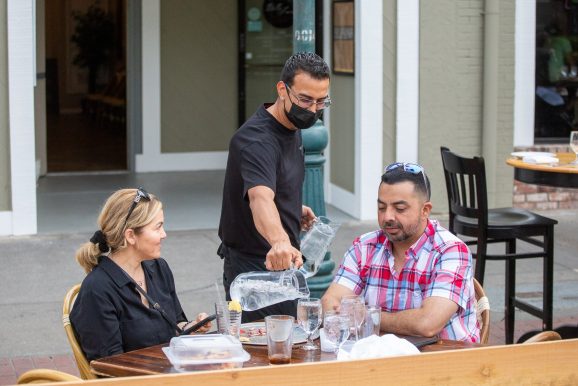 Local elections under clouds of controversy