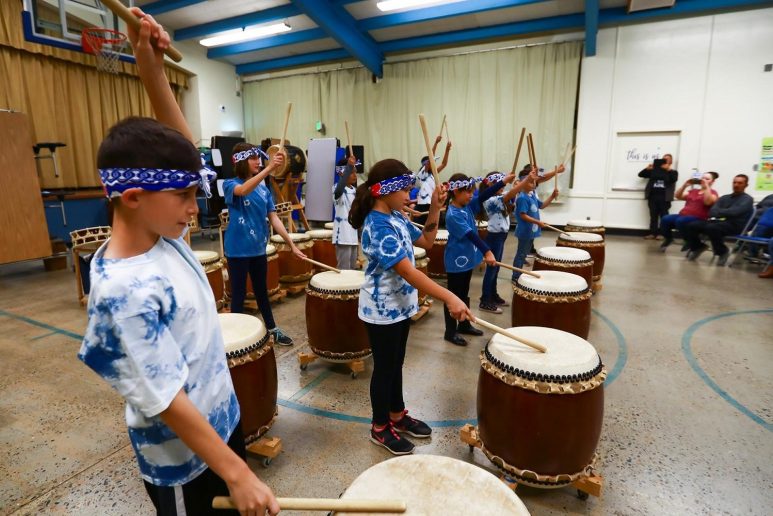 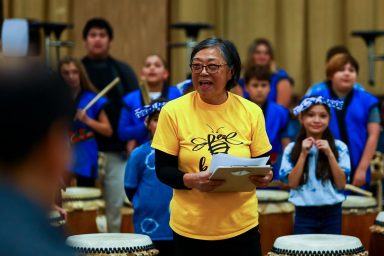 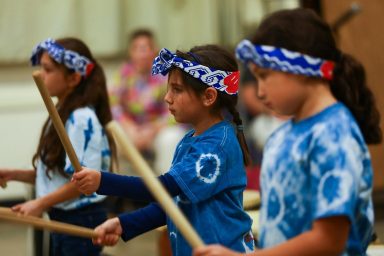 A group of Ballico-Cressey School District students are taking part in an age-old tradition of Taiko drumming.

Like a kettle drum, Taiko drums produce a wide variety of sounds from deep to high-pitched. From Japan and catching on in the United States, Taiko drums originally were fashioned from tree trunks but now are generally made from wine barrels.

Retired Ballico-Cressey teacher Christine Kubo now has 23 students from fourth to eighth grades in her Taiko performing group and another 15 students in the beginning to intermediate group.

The group has 17 drums, some of them made by Kubo’s husband Dan, also a retired teacher and a semi-recent Taiko drummer himself.

Christine Kubo said Taiko drumming now has become an art form. In the late 1940s, the Kumi-daiko style of ensemble drumming developed in Japan. Seiichi Tanaka, a Japanese Grand Master, brought it to San Francisco in the 1950s.

“It started out as a way of expressions and was felt to be an essential part of cultural celebration,” Christine Kubo said.

Dan Kubo said the Taiko style started in Japan was influenced by American jazz. He started to play three years ago but his main attraction was building the drums themselves. He figures he has made about 20 of the drums, including hand-held versions used solely for practice. He also has crafted the stands that the drums are placed on.

“The rest is history,” Christine Kubo said. “It started with 14 kids from fourth to eighth grades, and adults joined us. We also teach Taiko at Cressey School which has transitional kindergarten through second grade. They get 25-minute lessons once a week.”

Except for one year at Keyes, Christine Kubo taught for 30 years at Ballico-Cressey schools, retiring three years ago. She taught all grades along with special education.

As a child growing up in Japan, she said it was exciting to see performances with Taiko drums. She has been playing the Taiko drums for about 25 years. Dan Kubo taught at Ballico-Cressey for 12 years, mostly junior high social studies, and went to the schools there years before as did his father.

“I love the music that comes off Taiko. I really enjoy it. There often is a lot of movement with it, almost like dance. The sound is really basic and incorporates some Japanese-style techniques along with contemporary music rhythms,” Dan Kubo said.

Christine Kubo said students work on composing song variations themselves. It takes about three years for students to reach performing level status. However, even the beginners helped put on a Nov. 20 community recital at the Ballico-Cressey School gymnasium. An end-of-year recital is customarily held in May as well.

Christine Kubo said Taiko is performed across the United States and Canada, along with Mexico, Germany, England, Spain, South America and Europe. Dan Kubo added virtually all of the University of California campuses, including Merced, have Taiko groups, along with UCLA and Stanford University.

“Taiko is a way to have a voice. It is animated and spirited. It’s a means of expressing oneself more than anything else. In Japan it started as an accompaniment and then became a stand-on-its-own musical form,” Christine Kubo said.