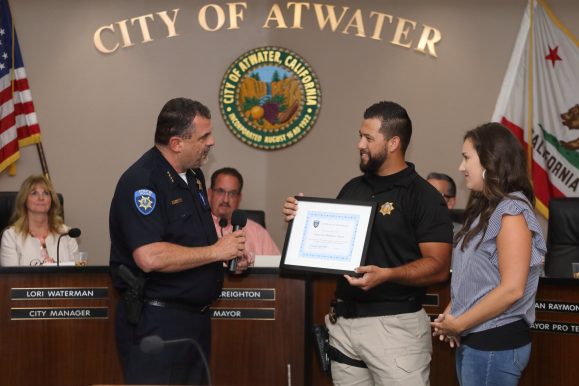 The Atwater City Council meeting on Monday proved to be an eventful and efficient meeting for the city. Despite the quick speed of the proceedings, a great deal of important business was brought before city leaders and quickly taken care of. On the agenda for the night was the acknowledgment of a Police Department detective and gang expert who assisted the Merced County District Attorney’s Office in removing around a dozen high-ranking gang members from city streets, the swearing in of a new Public Works Director, and discussion and action on the city budget that will bring Atwater into the year 2020.

Atwater Budget back in black
Highlighting the meeting was the passage of the 2019-20 fiscal budget. Initially presenting the budget to city leaders for consideration was City Manager Lori Waterman, who noted she was particularly excited about it.

“After eight years of operating at a deficit, this budget would result in a positive balance,” Waterman said.

Interim finance director Teri Albrecht noted that at the direction of leadership during a budget workshop earlier in the day, $225,000 of projected revenue related to cannabis regulation fees was removed from the draft being presented to the council. Members of the council acknowledged the removal as being in the best interest of the city moving forward. Last year, an otherwise steady budget process experienced a deficit as the cannabis industry got off to a slower start than anticipated, and the expected revenue never came. In addition to the removal of the $225,000 in public benefit cannabis fee revenue, expenditures of $400 for swim lessons was also removed, bringing Atwater into a healthy financial position.
“I want to make mention that this budget is completely eliminating city furloughs and would immediately put our workers back to work full time, opening City Hall five days a week” said Councilwoman Cindy Vierra. “I want to thank all of the city employees that stuck with us through this furlough time. I know that it was a strain financially on families and can be very hard, so I’m glad that we were able to alleviate that, and it’s just one more step of becoming whole.” She went on to say that she found it “refreshing to see that we’re passing a budget where we no longer have a general fund deficit,” and that, while optimistic, is proceeding cautiously.

“I know that we’ll be getting income from [the cannabis public benefit revenue] but, I think that it is unanimous among the council, that even though we are beginning to see our budget in the black, we want to be really careful so that we don’t take two steps forward, one step back.”

Highlighting one unique part of this year’s budgeting process, Mayor Creighton pointed to citizens ability to go through the entire budget, department by department and funding source by funding source, to see where money is coming from and going to line by line in explicit details down to the types of items and specific services rendered.

“We’re bringing to the citizens a balanced budget, a good budget, the best budget we’ve had probably, and I’m not exaggerating, in 20-plus years that you could read it as a citizen and know where the money’s going, how it got there, and how it’s getting used,” said Mayor Creighton. “Instead of just bulk numbers when they bought stuff, or that’s what they did, we’re being a little bit more detailed in the footnotes.” He went on to thank city staff for following through with the amount of requested budget detail.

The 2019-20 budget was passed by all present council members. Council member Brian Raymond was absent during the vote due to a family emergency, but upon returning noted that he had intended to vote in favor.

APD Detective Vierra honored for securing streets
Police Detective Matthew Vierra joined Atwater Police Chief Michael Salvador and Deputy District Attorney Tyson McCoy in front of the City Council dais where he was honored for five months of work that culminated in the removal of around a dozen gang members from local city streets.

Speaking about his detective’s work, Chief Salvador noted that it was in relation to “a case that is kind of infamous,” but declined to go into more detail. “The people he helped put away are some pretty dangerous people, so I’m gonna leave that piece of it out of the equation, but it’s not anything I haven’t seen before from this detective.”

The Chief of Police went on to say that early on he noticed Detective Vierra’s passion. “In my third week here, we had the Ethan Morse homicide and Matt was johnny-on-the-spot and he worked tirelessly for a good six weeks,” Chief Salvador recalled. “All I had to do is call him, ‘Hey Matt what’s going on with the case?’ and he’d tell me, ‘We’re close chief, we’re really close,’ and when I’d ask ‘Do you need anything?’ it would always be ‘Nope I got it.’”

Chief Salvador went on to joke that he didn’t “know if his wife knew where he was during the five weeks, because he was in our building more than he’s probably at home.” He then asked her to join them on the floor and explained that her name deserves to be on the awards alongside of her husband’s to signify the dedication they both have to making Atwater safer.
Echoing Chief Salvador’s sentiments, Deputy District Attorney Tyson McCoy testified to Detective Vierra’s work as well, saying that he “did an amazing job in a case that involved about a dozen gangsters. These individuals are very dangerous, some of the most high-ranking gangsters in Merced County and in this city, and it resulted in several convictions and there’s multiple life sentences that will come out of this case.” McCoy closed by saying that the city of Atwater should be very proud to have detective Vierra on their squad, as it’s not easy to be a gang expert.

Public Works Director Haddix sworn in
Public Works Director Vernice Haddix was sworn in following the presentation to Detective Vierra. Led by Atwater Mayor Paul Creighton, council members and City Manager Lori Waterman made their way to the floor as the swearing in ceremony got underway. Mayor Creighton opened the ceremony by assuring Haddix that he has the full support of both the City Council, City Manager’s office, and the staff throughout City Hall and its departments. “Everybody is behind you so you could do nothing but succeed while you’re here,” the mayor said.

Haddix comes to the City of Atwater with 20 years of municipal experience within Public Works departments. Additionally, Haddix was chosen for his work as a transformational leadership and shared vision with city leaderships vision for Atwater. As he continues to lead the Public Works department, Haddix will also be working to obtain a PhD.
Following his swearing in ceremony, Haddix spoke to those in attendance as part of a short introduction to the community of Atwater.

“I am truly truly grateful to be here,” Haddix began. “I have had quite an extensive period of time that I’ve been in public works, because I truly love public works. I don’t think there’s a better job in the world than public works.”
He went on to explain that he takes great pride in residents knowing that when they go home each day they know that their utilities will run as expected because of the Public Works Department.