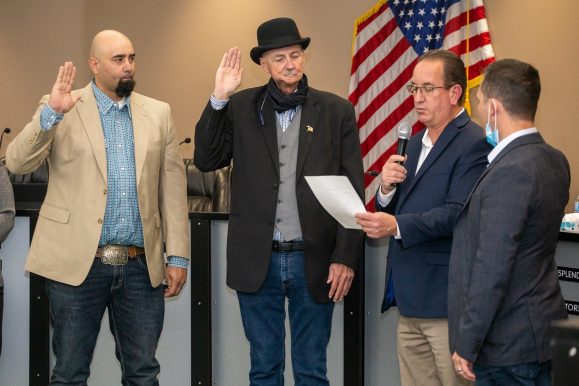 Atwater Mayor Paul Creighton, at right of center, swears in Councilman John Cale, at left of center, in 2020. 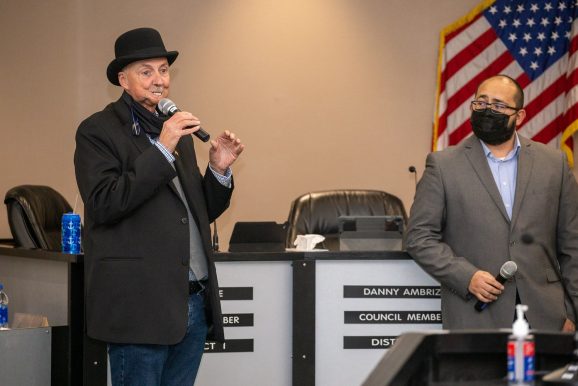 It was a pretty quick about-face for Atwater Mayor Paul Creighton.

About a month after he shook the local political scene by announcing he would run for the District 3 seat on the Merced County Board of Supervisors — which represents the city of Atwater — Creighton has withdrawn his intent to run with the county’s Elections department.

Mayor Creighton revealed to the Times that he was reconsidering his goals, and has been reaching out to community members and supporters to let them know he no longer intends to run for the county seat.

“My schedule and work load isn’t giving me the needed time to focus on running for office again, and additionally my family on both sides of the Untied States are needing help from me at this time as well,”  he said.

Apparently, Mayor Creighton is stepping out of the local political arena, and meanwhile, Atwater City Councilman John Cale is looking to fill the void that would be left by his departure.

In late July, Cale announced on his Facebook page that he would be running for mayor of Atwater. He said the decision was made while on a cross country trip with his wife,Fily, who noted the country is not looking so good and needed help.

Cale has served on the Atwater City Council since being appointed in 2018. He won election to the District 1 council post in 2020.

However, Cale is quick to note that Mayor Creighton’s previous decisions had played a role in his desire to campaign for mayor of Atwater.

“One of the main things that made me want to run was hearing that Paul would be running to be a Supervisor,” he told the Times. He also noted that his decision to run was based on speaking with District 4 Councilman Brian Raymond, who signaled that he had no intention to run for the top spot.

In recent months, Cale has focused his efforts on the reopening of Veterans Memorial Hall in Atwater. He has also become a vocal proponent of working to eliminate homelessness in the City of Atwater, saying that while resources and assistance should be brought together for those who wish to avail themselves of it, those who show a desire to remain homeless, and display a penchant for causing blight,or are vandalizing community areas, will be taken care of as well.

“I want them to understand that we will not put up with mischief or blight in the community,” he said.

Additionally,  Cale would like to help hammer out a renewed tax measure inAtwater that helps fund public safety.  “I really want to do work on our safety tax,” he said. “We need to make sure we extend that tax before it sunsets so we can continue to take care of our public safety departments.”

Cale is encouraging residents that have questions to feel free to approach and speak with him in the days, weeks and months leading up to the election.

Merced County Board of Supervisors to Consider Replacement for Retiring CEO

Spread love and joy — not Covid — during the holiday season

Children ages 5-11 can get the vaccine