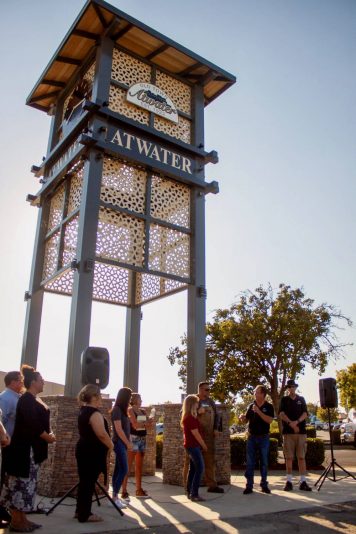 Atwater dignitaries, including Mayor Paul Creighton, gather with residents for the unveiling of the town’s new downtown clocktower on Tuesday, Aug. 16 — the date the city was incorporated 100 years ago. 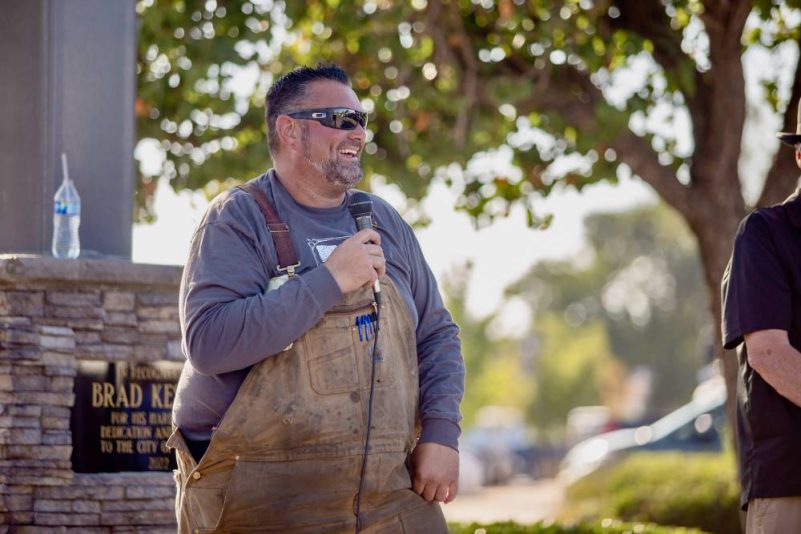 In spite of an excessive heat warning, hundreds of locals gathered in downtown Atwater on Tuesday to celebrate the unveiling of a new downtown clocktower to mark the town’s 100-year anniversary.

This monumental project was made possible through a collaboration between the City of Atwater, the Old Town Atwater organization, and BK Welding led by Brad Kessler.

Notably, the project was completed without the use of city funds. Even more impressive, the construction of the 38-foot-high structure started only four weeks ago.

“This project was definitely a rather important one for the restoration of downtown,” Kessler said. “It shows everybody that after a hundred years, we can be a town that is sustainable… It’s going to show everybody that we are moving forward, and we are going to keep things going in the right direction. I hope that everybody sees the meaning behind it, and the tremendous amount of hard work from all of the guys in the industry that came out and busted their butts to get it done for this town. It was very important, and it was wonderful to do.”

Approximately 500 people were in attendance. Mayor Paul Creighton and City Councilman John Cale, along with a few other distinguished residents took some time to speak to the attendees about the importance of the project.

“First, I would like to say how extremely proud I am of all the residents of Atwater,” Creighton said. “We went through some pretty dark times with the deficit and political turmoil. And now we have an opportunity as we rebuild the downtown corridor… Our downtown was pretty quiet the last four or five years, and now we’ve got a rebirthing going on. This is what happens when you ask people to come and be involved, and you let them have a say and an opportunity to participate. Great things like this happen. I could have never dreamed four years ago, when I took over as mayor, that we’d be transforming this city this fast… We have the highest growth Atwater has ever had in its history. So the people are doing something right here, and I’m just proud to be the leader of the pack.”

The clocktower was constructed out of steel and stone that was all sourced and constructed locally. It has three clock faces, one facing the new City Hall site, one facing the Atwater City School District building, and another facing the downtown intersection of 5th and Broadway. Additionally, the remaining face of the tower has an Old Town Atwater sign that looks over the plaza where the seasonal Ice-Skating Rink is located. Although the electronics of the clock were not yet completed on Tuesday, the faces of the clocks were set to 8:16 in order to represent Atwater’s 100-year anniversary date, Aug. 16.