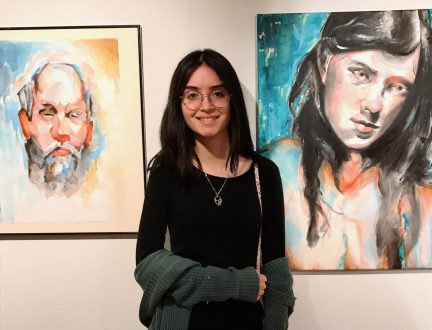 Mary Gomez, an El Capitan High student, won Outstanding in Painting for ‘Scott,’ the water color on the left, and she was awarded Second Place for ‘Monday,’ the acrylic painting on the right. 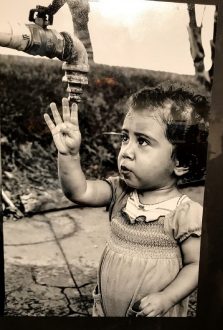 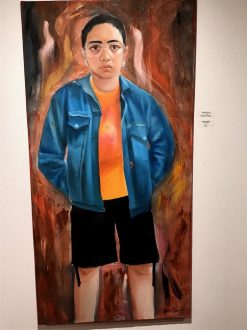 The First Place award in Painting went to Giselle Vanagten’s ‘Self Portrait.’ 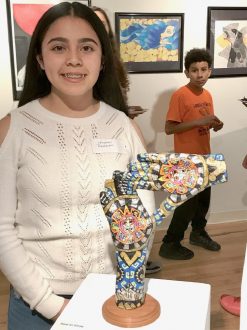 Crystal Romero, a Pacheco High student, won First Place in Three-Dimensional Art as well as Best In Show for her sculpture, ‘A Piece of Heritage.’ 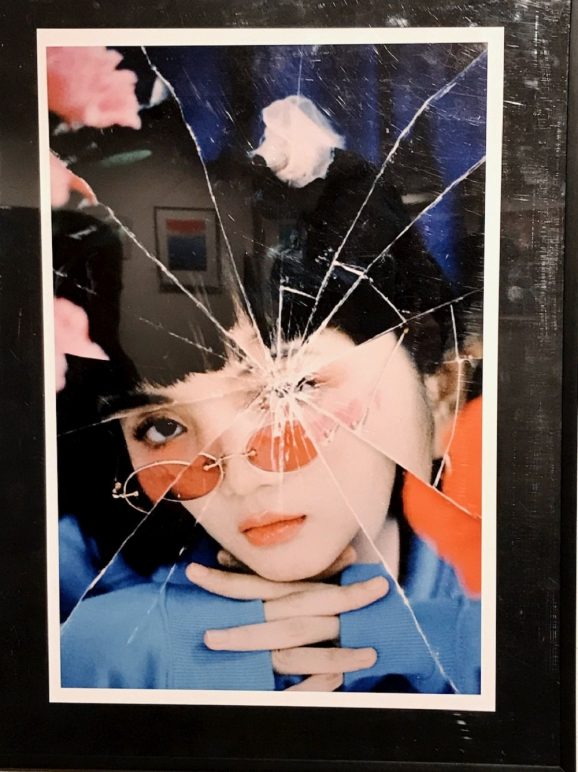 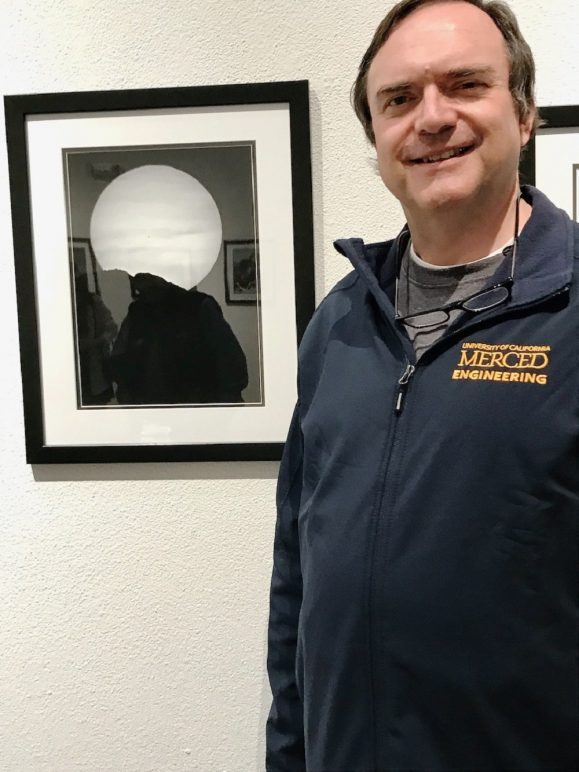 Artist Christopher Viney poses beside his digital photograph, ‘Glacier Point Sunrise with Transit of Mercury,’ which is part of his exhibit, ‘Yosemite On My Mind.’

Two interesting art exhibits — the MCAC Honors High School show, and “Yosemite On My Mind” (digital photography by Christopher Viney) — are being displayed at the Merced Multicultural Arts Center in Merced, through April 11 and April 1, respectively.

The receptions for both exhibits and an awards ceremony for the high school artists  drew a crowd of enthusiasts to the MAC on the evening of March 6.

The high school artists were acknowledged and invited to introduce themselves and identify their works on exhibit.

Their high school art teachers, many of whom were present, were also acknowledged.

Janine Echabarne, the exhibit’s curator, who is a member of the MAC Board and an artist herself, presented awards for Outstanding and First, Second and Third Place in the following categories:  Painting, Drawing, Mixed Media, Photography, 3-D, and Digital Art/Illustration.

The First Place winners were as follows:

First Place in Painting was awarded to Giselle Vanagten of El Capitan High for “Self-Portrait.”

First Place in Drawing went to Jordan Romero of Atwater High for “Zillakami.”

First Place in Photography went to Victoria Alvarado of Atwater High for “Wonder.”

First Place in Three-Dimensional Art was awarded to Crystal Romero of Pacheco High for “A Piece of Heritage.”

First Place in Digital Art/Illustration was awarded to Wendy Park of El Capitan High for “Geum-i-gan.”

The last award was Best In Show, which was presented to Crystal Romero, a student at Pacheco High School, for her three-dimensional work, a sculpture called “A Piece of Heritage.”

Melissa Mathis, her Art teacher, told the Times, proudly, “She took a plaster mold of her own hands and did intricate drawing and painting on top of it. She studied her own culture to create the designs.”

Romero explained, “I wanted to do something that represents me. My middle name is Zayetxi. My dad was overseas. He named me after an Aztec princess.”

The additional highlights of the high school exhibit are too numerous to mention.

One was the work of Mary Gomez, a student at El Capitan High School. She received Outstanding in Painting for “Scott” and Second Place in the same category for “Monday.”

Gomez told the Times, “‘Scott’ is a water color of an older man from Snelling, who is a neighbor. I painted it from a photo. ‘Monday’ is an acrylic. I did it on a Monday. The girl is naked. She’s vulnerable. She’s kind of lost. She doesn’t know who she is. Many people think it’s a painting of me, but it’s not.”

Local artist Christopher Viney was on hand at the Artist Reception to talk about “Yosemite On My Mind,” his black and white digital photography exhibit of Yosemite.

He is from England and began traveling to the United States years ago.  He was on the faculty of the University of Washington from 1988 to 1995.  His wife is from Seattle.

On his third trip, he decided to stay in the U. S. and become citizen.

Viney was one of the original eight professors hired at UC Merced.

He told the Times, “In the mid-1980’s, I had seen Yosemite briefly.  Seventeen years ago, I had two job offers, one at UC Merced and one on the East Coast.  I chose UC Merced for several reasons, one of which is Yosemite.  I do photography as part of my job as a professor of Materials Engineering at UC Merced.

“I use a digital camera and do minimal things on the computer.  I do single exposures.

“But one photo in the exhibit is 93 separate pictures stitched together and shows Yosemite Falls with software – – the Upper Falls, Middle Cascade, and Lower Falls.  It was 93 frames compressed into one frame.  You can look straight ahead at ‘OMG Point’ and see the whole scene.  It’s called ‘All 2,425 Feet’, the height of the falls.

“Sometimes, I photograph whatever catches my eye.  It might be the crystalline texture of ice growing on dry grass stalks, or the pattern of weathering on granite, or ripples in water.  I enjoy photographing tree roots, their patterns and textures.

“Sometimes, my photography is planned.

“If it’s early enough in the morning, I can drive from Atwater to Yosemite and I’m the first car in the parking lot.

Describing one of the most fascinating photographs in the exhibit, Viney said, “On Nov. 11, I went to Yosemite to Glacier Point at sunrise. I saw a transit of the planet Mercury traversing the face of the sun. It was at about 7 a.m.

“The photograph is called ‘Glacier Point Sunrise with Transit of Mercury’.  The clouds gave the sun a little texture.  The black dot in the photograph is Mercury.  It’s almost in the middle of the sun.  It’s against Red Peak.”

The exhibits can be seen at the Merced Multicultural Arts Center, located at 645 W. Main Street in Merced.  Gallery hours are Tuesdays through Fridays from 11 a.m. to 6 p.m. and Saturdays from 10 a.m. to 2 p.m.

Schools to remain closed for rest of school year