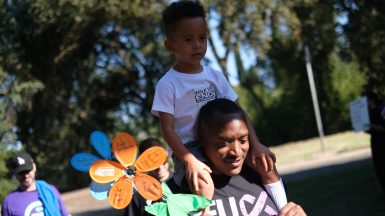 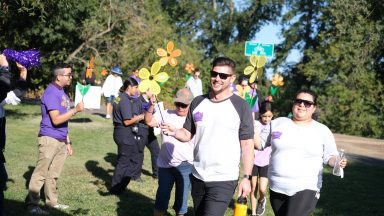 Teams of participants gathered at the starting line before setting off down the walking path along Bear Creek. 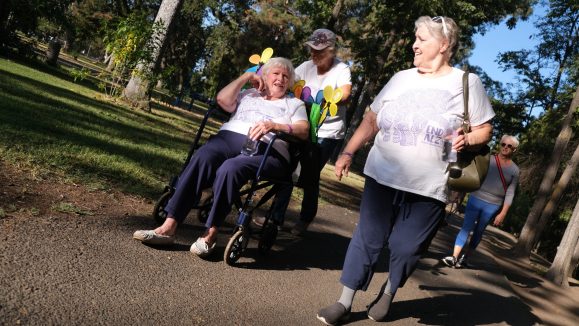 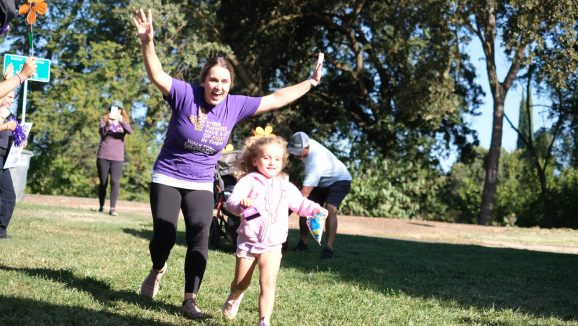 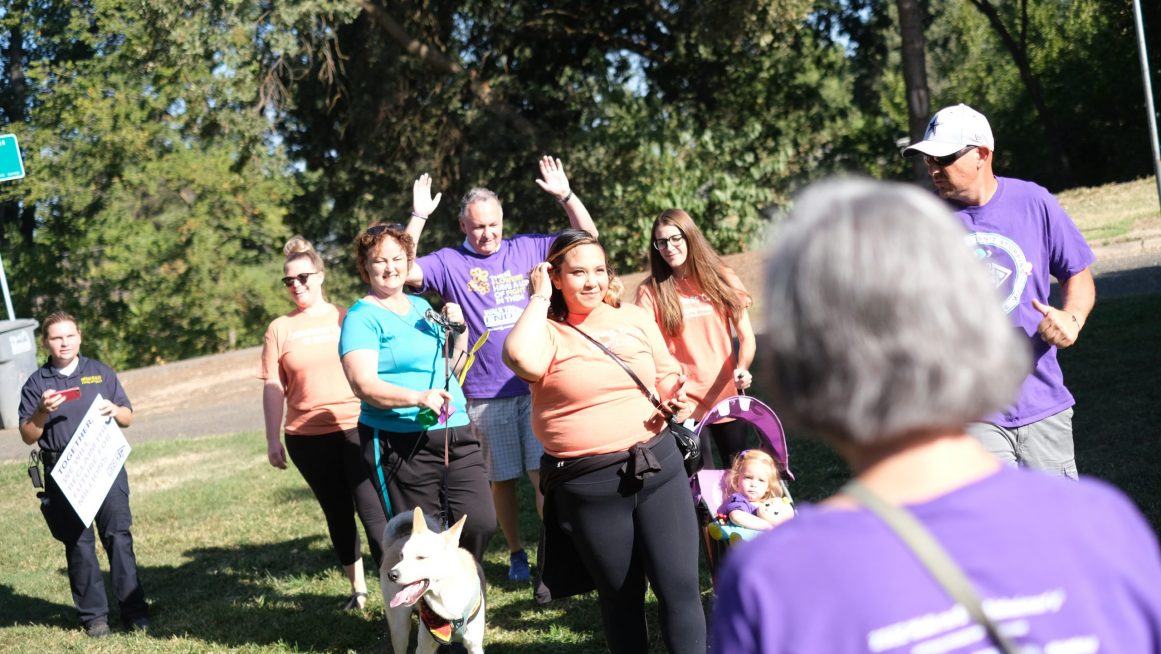 A corner of Applegate Park was painted purple last weekend for the annual Walk to End Alzheimer’s.

Hundreds of people turned out to the event on Saturday morning, when the sun was still low in the sky and the weather was cool and comfortable.

They were friends and family of Alzheimer’s victims, caregivers and survivors themselves, each holding a colored paper flower as is custom for the awareness campaign every October. Orange for those who support the cause, yellow for those who are caring for someone with Alzheimer’s, blue for someone living with it and purple for those who have lost someone to the disease.

After a brief opening ceremony, teams of participants gathered at the starting line before setting off down the walking path along Bear Creek. Some walked a two mile loop around the creek, while others walked a one mile route. And some rolled along in wheelchairs, like Doris Fleitz. She was pushed by her friends Debbie Shamblin and Glenda Farris, who steered her carefully around the many cracks and bumps in the asphalt. Doris doesn’t have Alzheimer’s, she said, but she does have a cognitive brain disorder that prevents her from walking, and she wanted to support the cause. Shamblin’s mother and her mother’s three siblings had Alzheimer’s, she said, and they all died within a month of each other. It’s the women’s second year doing the walk.

“If you don’t have the people, you’re not going to get anywhere,” said Farris. “The more people come out and help support, the better.”

About 45 minutes later, the first walkers arrived at the finish line. Volunteers lined the path, waving and cheering as people walked the last few steps and passed under the big purple archway. In total, the event raised $73,000, about 86 percent of the goal of $85,000. About 48 teams participated this year.

Around 3,500 people currently live with Alzheimer’s in Merced County, according to event organizer Denise Glassett. Nationwide, more than 6 million people live with Alzheimer’s, and it’s the seventh leading cause of death in America. COVID was responsible for a 17 percent increase in Alzheimer’s and dementia related deaths. Many seniors who have it don’t even know they have it, which is why a big part of the yearly walks are about educating people on the signs and symptoms.

Memory loss that disrupts daily life is a common sign of Alzheimer’s and often occurs in the early stages of the disease. Other common signs include making mistakes in managing household affairs like paying bills and having trouble completing familiar tasks. The Alzheimer’s Association has resources on its website, alz.org, to help people determine if they are dealing with Alzheimer’s or another type of dementia.