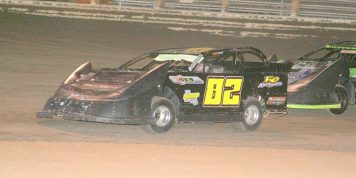 This was his second win here, and it paid $2,000 as the track was offering an increased purse.

The money helped draw a 28 car field for the show. Ahlwardt made the redraw and drew the pole for the race. He battled Les Friend early, but Bakersfield Speedway stars Michael Johnson and Ricky Childress Jr came from further back to make a challenge. Ahlwardt wasn’t about to let the rich victory get away as he took the checkered flag ahead of Johnson, Childress, KC Keller and Friend. Kelly Wilkinson finished sixth, followed by point leader Fred Ryland, Chuck Weir, Chris Falkenberg and Jeremy Hoff.

The Sport Modifieds ran four eight lap heat races with wins going to Johnson, Doff Cooksey, Kyle Wood and Wilkinson. Keller also picked up four lap Trophy Dash honors. They ran a pair of 12 lap B Mains to determine the remainder of the field. Nick Tucker won the first one ahead of Jack Aguiar and Jeremy Hoff. Fred Ryland snapped his wife Patti’s two-race B Main win streak by holding her off to win the other B Main as Falkenberg finished third.

Merced Speedway will be hosting a big CRA/USAC Wingless Sprint Car Speedweek race on Friday. Also on the card will be the Hobby Stocks, Mini Stocks and California Sharp Mini Late Models. For further information, go online to: mercedspeedway.net.