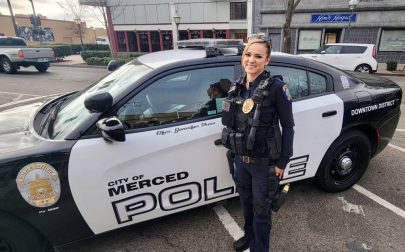 A personalized ‘Downtown District’ patrol car comes with the job. 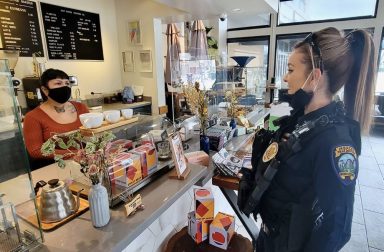 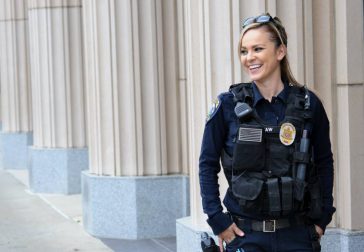 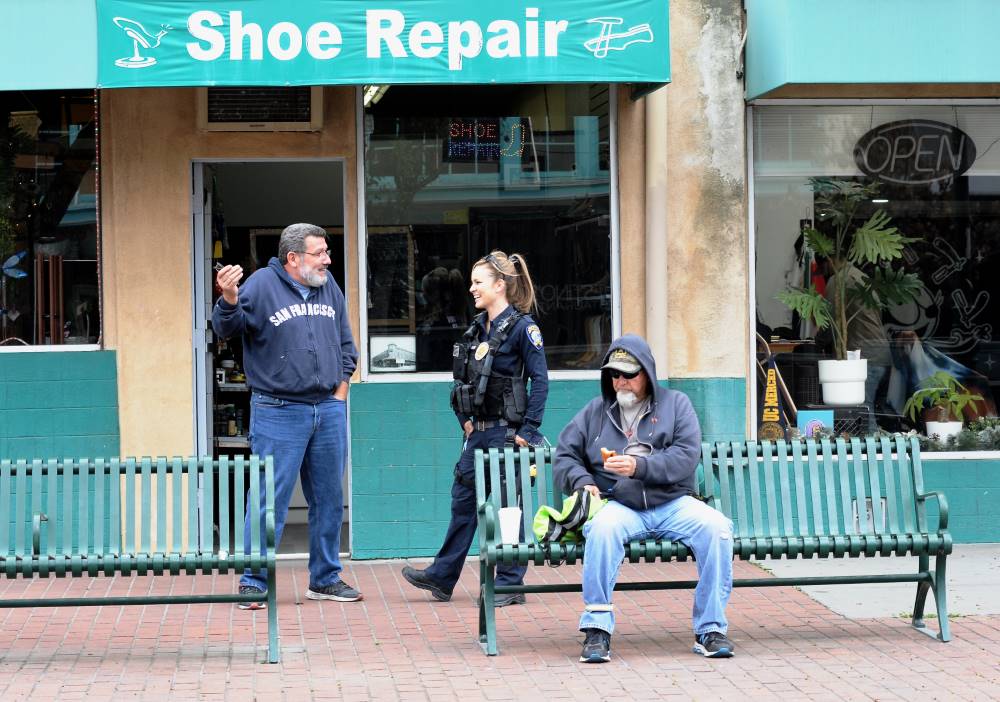 Officer Shaw meets with a downtown business owner during her morning patrol.

Having to patrol all of downtown Merced might seem to be a daunting task but it’s right up Jennifer Shaw’s wheelhouse.

Since the end of December, Shaw’s “beat” includes 15th to 19th streets from G Street to Highway 59; it means looking out for all merchants in this vast commercial expanse and dealing with homeless people and transients.

She has formed lots of bonds with downtown business people and tries to touch base with all of them every week.

But that enormous responsibility doesn’t faze the 35-year-old Shaw who has been a Merced Police Department officer since Jan. 7, 2019; previously she was a probation officer and also dealt with domestic violence and sexual assault issues for the Merced County Behavioral Health Department. She has been an advocate for those needing help with their lives in those roles.

“It’s been pretty good so far. I have had to arrest law violators and I help the homeless get the services they need and find other alternatives,” Shaw says.

There have been no surprises or stressful encounters, she adds.

Capt. Joe Weiss said Shaw is uniquely qualified for her specialized role downtown. She graduated from UC Merced in 2010 with a bachelor’s degree in psychology and a minor in sociology.

“She’s a perfect fit. We have seen lots of positive feedback and we are really excited about this. We realize how important small businesses are to this community and we want all businesses to be successful. We hope to keep this going on a permanent basis,” Weiss says.

The department has confidence in Shaw’s new position moving forward and they hope it will be a lasting addition to police services, he adds.

Weiss watches over the department’s Disruptive Area Response Team which has a sergeant and four officers. Shaw has served on the DART team and is familiar with its role in dealing with the homeless. She also takes pride in knowing her work has helped many disadvantaged residents receive critical services, including permanent supportive housing.

The department has 98 sworn positions and leaders reassigned some beat responsibilities to accommodate Shaw’s downtown beat.

She stresses one of her main roles is developing positive relationships with downtown businesses. She has seen less transient traffic downtown and wants to ensure that residents feel comfortable patronizing downtown retail establishments.

Lt. Emily Foster said Shaw is a perfect match for the program’s needs and with her experience, training and personality. Her assignment has been positive and an exciting opportunity for the department. Foster says it’s always good for police officers to partner with businesses.

“I am very confident Shaw’s new position will be successful. The downtown is a very important area and we want people to be comfortable; this is a step in the right direction,” Foster says.

Shaw says she is very dedicated to the police department and is invested in its operations, with a deep commitment to help the people in Merced.