A Forest Grows Not So Far Away 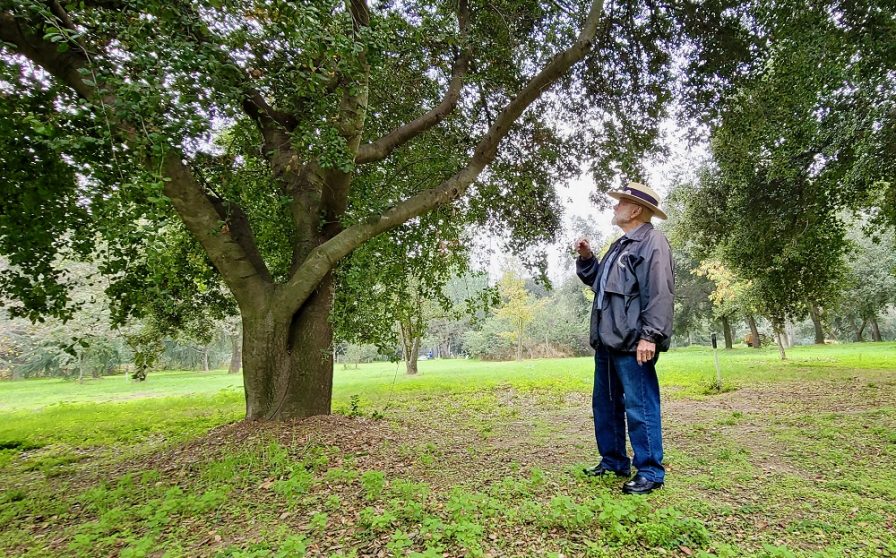 It’s hard to believe this Sequoia semperviren grew from a seed the Williamsons planted earlier in their lifetime.

About three miles from downtown Atwater lies an area that is totally different from the surrounding and unassuming agricultural countryside.

For the family that settled there almost 60 years ago it became an oasis — make that an urban forest — that boosts spirits to this day.

Retired marriage-family therapist and tree advocate Dr. Jim Williamson has lived on the 15-acre property since 1962. He and his late wife Barbara used to call it “Whispering Hope” and people in the area call it “The Woods.” It’s a place where serenity is a product of the dense planting of oaks, redwoods and all manner of trees, shrubs and flowers.

“Our neighbors thought we were crazy, creating our own forest,” Williamson chuckles.

In 1962 the Williamsons were able to buy the property from farmer and dairyman Paul Rethwich; they had been driving in the area and walked through his field of corn and alfalfa which was about ready to harvest, with gentle winds blowing around them. When they first knocked on Rethwich’s door to inquire if the land were for sale, he told them he wasn’t ready to sell the place but that decision came just a few years later.

Soon after buying the property, they started planting trees, especially oak trees. Williamson said there are 14 species of oak trees from all over the world planted there. He remembers his family driving up and down the fields throwing out acorns here and there.

After a while Williamson’s forest became a site for the weddings of his children and grandchildren. Now it’s a habitat for wildlife, with hawks, owls, foxes, rabbits, possums and gopher snakes. Blue jays, doves, woodpeckers and other birds take up residence in the trees. At first the area was full of crows but the owls soon pushed them out.

Williamson, 84, said his property feels peaceful and therapeutic, like a living mental health clinic. That’s a feeling his gardener of 35 years, Homer Hernandez, shares. He has been Williamson’s steady gardener since retiring from a full-time, stressful career with Foster Farms.

“I don’t come out here for what he pays me. It’s beautiful! I enjoy it so much. You would never guess what’s back here. I wish people would love trees more,” Hernandez says.

Williamson said he and his wife Barbara had a little cabin in Jenness Park near Strawberry. But they soon expanded their Atwater property into their own retreat or forest.

“We came out here to get our heads straight,” he says.

Willamson said they have about 50 redwood trees on the property, most planted from seeds. He says redwoods are water hogs — each tree consumes 500 gallons of water a day.

“They are our silent servants; that’s what they are. This (forest) is the most important thing to our family.  It’s a legacy for the kids,” Williamson says. The Williamsons had three children, seven grandchildren and three great-grandchildren.

Along with oaks and redwoods, Willamson’s comfortable home is surrounded by many succulents, native plants and fringe flowers. There are oleanders, begonias, potato bushes and giant Mozo bamboo bushes from China which provide brilliant colors at the appropriate times of the year. Cedars, ginkos, Canary Island pines and citrus trees soon joined the surroundings.

Born in South San Gabriel, Williamson’s love for growing things, especially trees, was nurtured by his grandfather who owned land around Temple City.

During World War I Williamson’s grandfather operated a truck farm which helped feed needy people in the neighborhood. He also had a small botanical garden which instilled a love of trees into his grandson.

Williamson’s Tree Partners Foundation was founded in 2003; they developed a memorandum of understanding with Merced College to set aside land for a botanical garden. Next spring a greenhouse will be erected.

The Tree Partners Foundation’s mission statement calls for the foundation to protect and preserve the urban forest in our cities. A nursery was established at U.S. Penitentiary, Atwater and trees have been planted in Merced’s Applegate Park.

A grove of trees was planted about four years ago near Merced’s zoo. Most of the occasions where trees are planted involve school children, including the recent planting of 90 trees at Planada Elementary School.

Williamson also collaborated with Dennis Riskey on the creation of the rosary garden several years ago at St. Patrick’s Catholic Church in North Merced. Some of the plantings there have matured to the point where they add a prayerful aura to the church surroundings.

What is Williamson’s favorite tree? It’s any type of oak. He says oaks are like people, some skinny and others looking like they were raised on steroids. Oak trees are misunderstood; there’s a myth that oak trees are slow-growing but an oak tree can grow two to three feet in a year.

“Oak trees are probably undervalued. They live forever. But we as humans kill more trees than anybody,” Willamson laments. “A tree is your servant for 10 months of the year and then it drops leaves. People get fussy and don’t want to maintain them. Cut them down and your utility bill will double,” Willamson says.

Cycling Supporters Unite For ‘Ride With The Mayor’