A Birthday Surprise For An Ageless Pilot 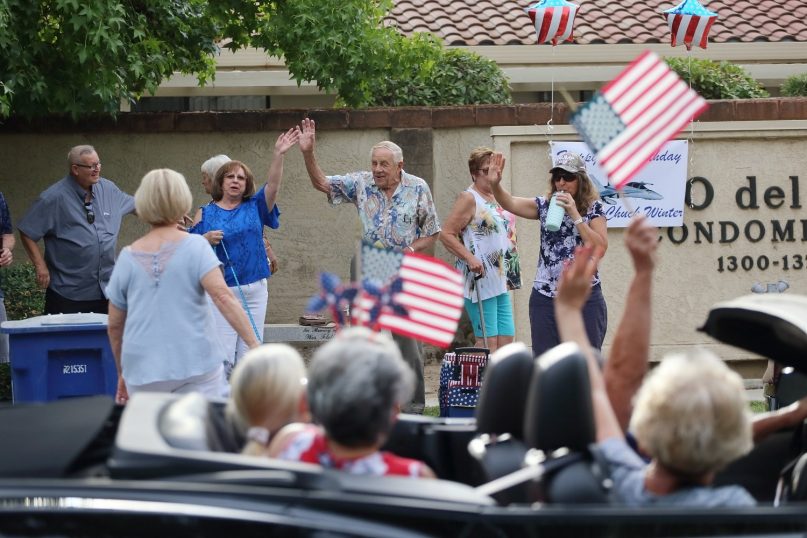 Colonel Charles ‘Chuck’ Winter of Merced waves to friends after they surprise him with a drive-by parade to celebrate his 90th birthday. Winter has been a longtime resident, business owner, and military standout. 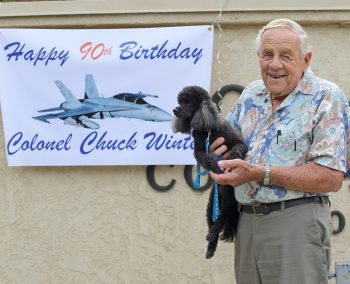 A happy Chuck Winter enjoys his birthday with his pet poodle. 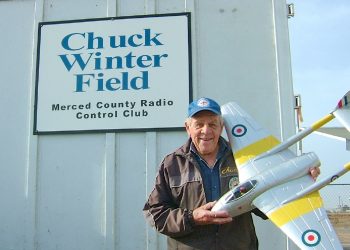 Chuck Winter was recently honored with his name being added to the local field used by pilots of radio-controlled airplanes. 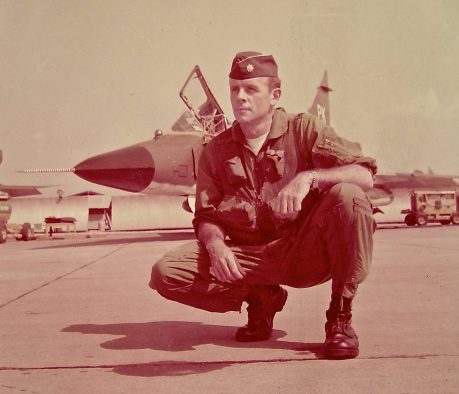 Chuck Winter in his early days as a fighter pilot for the Air Force. 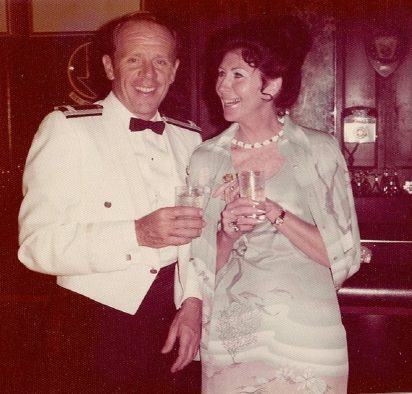 Chuck and Jeri Winter at the Officer’s Club. 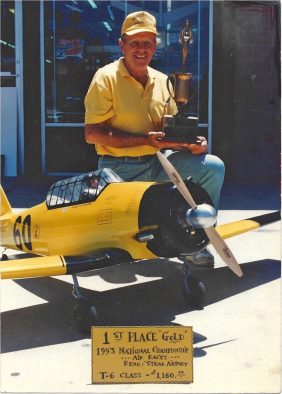 Retired Air Force Colonel Charles ‘Chuck’ Winter of Merced thought he was going to a good friend’s house for a nice dinner to celebrate his 90th birthday last Thursday, Aug. 13.

And that was true, but he never imagined the reception he received once he got there.

Winter was driven to a gated residential community and when he stepped out of the vehicle, he was greeted by a birthday banner and a few cheers from friends. Then as he looked around, a small parade of really nice convertible cars approached, and all of a sudden there was even more friends, smiling, waving American flags, honking horns and shouting well wishes.

“I was totally, totally surprised,” Winter told the Times. “One of my friends pulled up in a Corvette and presented me with a small cooler filled with Corona beer. It was wonderful. Just a beautiful evening which I didn’t expect at all.”

The night also included a prime rib dinner served in a red, white and blue setting. Much of the special occasion was organized by good friend Mary Kussler.

This has been a tough year for Winter regardless of the ongoing coronavirus pandemic. He lost his wife, Jeri, on Jan. 2, after more than 64 years of marriage. Jeri was a very well-known Realtor in the community for over 30 years. The couple were known for many things, including their patriotic celebrations on the Fourth of July.

“She was selling real estate and helping people right to the very end,” Winter said. “She was a good agent … honest and smart. A lot of the people who came to wish me happy birthday were her friends too. …

“It’s been a challenging year, but I’m a strong SOB. I have lived through a lot. I’m usually the guy who helps everybody anyway. I’m a very busy person.”

“Very busy” is an understatement. Winter spends his time monitoring the stock market, searching for deals on eBay, attending club meetings, and flying model airplanes. And in between all that, he manages to get in a daily swim.
“I’m going all the time,” he said with a laugh. “I have no problems health wise. … I’m just a pain in the ass.”

Winter hasn’t stopped “doing things” since he retired from the Air Force back in 1975. And he had a long, successful military career before that.

He started Officers Training School in 1952, and soon fell in love with the Air Force. He became a fighter pilot who would eventually fly quite a few combat jets and “interceptors,” including the F86 D Sabre, the Convair F-102 Delta Dagger, and the Convair F-106 Delta Dart.

There were “endless” Air Force assignments all over the world in the 1950s and ’60s. After all it was considered the Cold War. The first one was in Kansas City, Missouri where Winter met his soul mate “Jeri” — short for Geraldine.

“She was going through a stewardess program for the airlines. She was really from back east like me. We spoke the same language. I had a New York accent. We hit it off really well. Eventually we said, “Let’s do it,” and we got married. … It was a military wedding with swords and everything. All my fighter pilot buddies were there. It was quite something. Fantastic.”
The couple would go on to live in places all over the world during Winter’s military career, from Japan to the Philippines to Iceland to Florida and California, among many others. Winter would also serve two tours of duty during the Vietnam War.

By the time they arrived at Castle Air Force Base around 1970, Winter was a full colonel and the commander of the Civil Engineering Squadron. Chuck and Jeri now had three children in high school, and Jeri was becoming very interested in selling real estate. It was just something she loved to do.

After a few years, Winter was chosen for another assignment in Wyoming, but this time the family decided it was time to settle down and pursue other passions.

“We met a lot of nice people in Merced,” Winter recalled. “We became entrenched in the local society. Merced was a very nice area. We just like it. We were happy here.”

Winter retired from the military in 1975, but not before setting up another occupation. He always had hobbies in his life, including building model airplanes. So he decided to open his own shop called Hobby Castle.

Jeri found an ideal location at the College Green Shopping Center at Olive and G streets in Merced. This was back in the days where there was a movie cinema on the lot, and the popular Happy Steak restaurant. Well, George Parker of Parker’s Hardware downtown also held the lease on an outlet inside the center, but he was looking to move out. Jeri negotiated with Parker, and soon her husband was moving into a nice-sized store and hanging model airplanes from the ceiling.
Winter would end up operating Hobby Castle for the next 20 years.

“Today, when I go anywhere in Merced, people will look at me but they won’t say my name. They will just point at me and say: “Hobby Castle.”

Winter also became a competitive radio controlled airplane pilot, as well as one of the founders of the Merced County Radio Control Club. The club managed to get some land for a runway outside of Atwater, out on Bert Crane Road, near where the modern sewage plant is today.

The former fighter pilot is still active in the club, as well as many other things. In fact, just a few weeks ago, Winter was honored with the field being named in his honor. It’s now called Chuck Winter Field.

Meanwhile, Winter has been very busy making a lot of money in the national stock market.

“I do really well,” he said, “but I’m having concerns about what is happening in this country today. I’m worried about another black swan that could hit us again.”

Winter said he is not so worried about the ongoing pandemic.

He said staying active is the secret of his longevity …

“That and cheap booze,” he added.

The Next Building Boom: Who will reap rewards?