5-day Culinary Academy through AESD teaches students how to cook 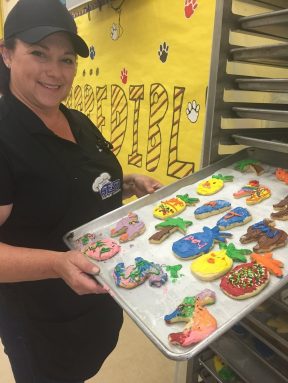 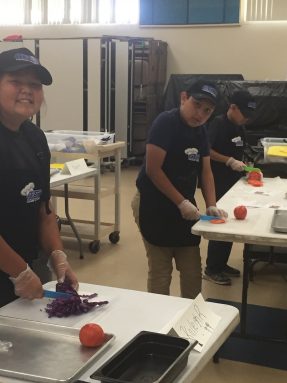 Students at the Culinary Academy hosted by the Atwater Elementary School District chopped and diced ingredients for homemade salsa. 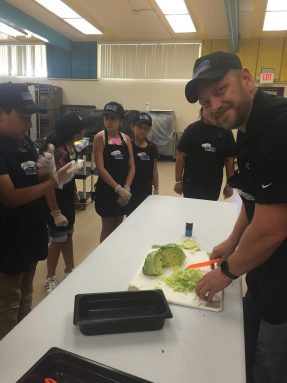 Carl Schwesinger, Sodexo Consultant, did a demo for the students on how to make salsa to go with tacos. 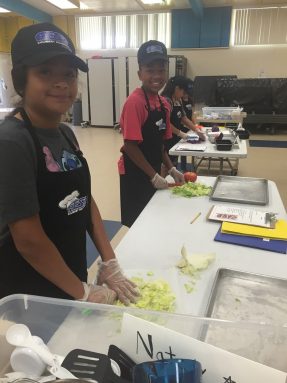 Students at the Culinary Academy hosted by the Atwater Elementary School District chopped and diced ingredients for homemade salsa.

On June 14, eight fifth grade grads who are going into sixth grade baked and decorated sugar cookies for Father’s Day, and then created homemade salsa and made tacos as participants in a Culinary Academy hosted by the Atwater Elementary School District (“AESD”).

Lisa Ludwig, AESD Food Service Supervisor, and Carl Schwesinger, Sodexo Consultant, teamed up to create the curriculum for the Culinary Academy, which was held from 8 a.m. to 12 noon at Aileen Colburn School in Atwater from June 10 through 14.

Sodexo is a French food services and facilities management company that has a team of professional chefs, registered dietitians, and suppliers and creates menu options for consumers worldwide, currently providing food for 500 school districts, including AESD.

During an interview with the Times, Ludwig explained, “The students these days still have an interest in and passion for learning to cook. To get to participate, they had to write a 250-word essay on why they wanted to be part of the Culinary Academy. Some of their reasons were to cook better than dad, and many said their mother works hard and they wanted to help her.”

On the morning of June 14, as the five girls and three boys gathered around, Schwesinger demonstrated how to make salsa to go with tacos, with the assistance of Marisela Perez, Bellevue School Cafeteria Manager, who was volunteering at the Culinary Academy.

Ludwig said, “After the demo by Sodexo, the kids have to recall the ingredients and write a list of the items, such as tomatoes, onions and cilantro. The list is written on one side of a card, and on the other side of the card, they write the directions, such as ‘dice tomatoes’. Now, they have their own recipe.”

She continued, “We created a produce table like at the grocery store. They have to take their trays to the produce table and get their ingredients, and they have to measure the items they need, whether dry or liquid.”

To make their own salsa, the students took their ingredients back to their stations and began dicing and chopping them, added herbs and seasonings, and then made sure all the items were mixed well.

Sampling the salsa drew mixed reactions. Some students exclaimed, “It’s hot!” They asked for a drink of water. Other students responded, “It’s perfect.”

Describing her background to teach at the Culinary Academy, Ludwig said, “I loved food and cooking as a teenager, so I made it a career. I got a degree from the California Culinary Academy in San Francisco, and I worked in many restaurants and bakeries before coming to AESD.”

She said, “The small class size, a maximum of 12 students, is to allow us to supervise them and work with them one-on-one. The first day of the session, after a discussion they came up with their rules for the kitchen. We teach them listening skills and how to write directions. They are taught about hand washing, food safety, safety in the kitchen, and working well with others. We taught knife skills using kid-safe knives. We are teaching responsibility – – they have to wash their own dishes and clean their own stations. They are also having fun.”

One of the highlights of the morning for the students was cutting out their sugar cookies and decorating them. On two previous days, they had made the dough and rolled out the dough. Some of the cut-outs the kids used were hearts, ducks, boots and camels, and they were beautifully colored.

On the other days of the Academy, the students made pizza, omelets, chicken stir fry, and pasta with both Alfredo sauce and red sauce.

The summer fun for kids who are learning to cook and bake is not over. A second five-day session of the Culinary Academy will take place in July.