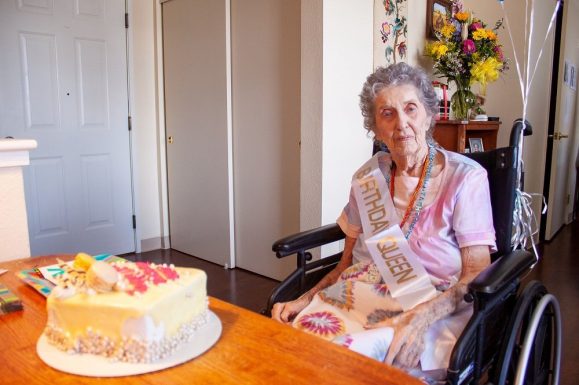 Lorraine Walker with her 100th birthday cake at Pacifica Senior Center in Merced. 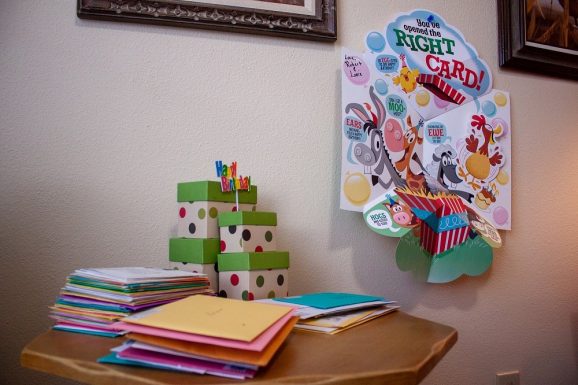 Walker received many birthday cards for the special occasion.

Lorraine Saye Walker turned 100 years of age on March 10, 2021, at the Pacifica Senior Center in Merced.

In addition to her birthday cake, Loraine celebrated her special day by reading through an impressive stack of birthday cards of all sizes, and recalling special moments with family members and friends, including Pacifica staff and residents.

The following interview with Lorraine was conducted by her son, William Boeck, with questions provided by the Merced County Times. that they thought would be of interest to their readers.

Tell us about your life?

I was born outside of Minot North Dakota to William and Sylvia Saye and lived on a farm. I had a brother Bill. At 10 years old we moved to California, first to Redwood City, then Wawona. My little sister, Bobby was born to the family at that time. I moved to Mariposa to attend High School, graduating in 1939. During this period I joined the Methodist church and still am a member. My first job was a secretary at the High School. In 1941 I married Frank Boeck, owner of the Mariposa Theatre. We had a son Bill. I found myself a young widow in the Fall of 1949 due to Frank’s heart attack.

I began work at the Bank Of America in 1950. I worked there for 25 years and during much of that time it was the only bank in the county. I got to know most of the people in Mariposa. Ralph Walker and I were married in 1951. He was a carpenter and worked in Yosemite and on many buildings in the county, including J.C. Fremont Hospital. He finished his construction career as Superintendent of Maintenance for the Mariposa County school district. We were able to celebrate 64 years of marriage before his passing in 2015.

During my lifetime I was active in the Methodist Church Women’s Society, helped my husband with our mobile home rentals, enjoyed boating at Lake McClure on the houseboat he built, raising my son, and just enjoyed living in Mariposa where my brother Bill and his wife Barbara Saye and my parents lived. In retirement Ralph and I travelled extensively in our trailer to 45 of the states including several trips to Alaska and Canada.

What are some of your favorite childhood memories?

Early memories were of the farm animals, chickens, goats, pigs, and horses. I remember my mother canning food and storing it in the basement. During the cold winters, when the downstairs wood stove would go out at night the teapot on top of it would have ice in it. I was always excited to see the purple crocus push through the snow which meant winter was over. .

The first two years in Wawona we lived in tent cabins in the summer. In Wintertime, Mom, Bill and I rented rooms from a family friend in Merced. Mother was an excellent baker and made bread, which us kids would sell to neighbors. Dad then built a house in Wawona, which is still there

What are your memories of the 1940s. What were the feelings in the country?

The War changed many things. First most of the men in town were gone. My husband Frank went into the Navy and was stationed at Treasure Island. He was assigned to a unit testing radio communications.

I had to learn to operate the Theatre. I would have to drive to San Francisco to pick up the rolls of film. Ration stamps were required to buy food and gasoline, so I had to be careful to have enough stamps for the film trips. The attitude during those years was concern for loved ones and would they return. The other feeling was that this War was something that had to be done. So you just did what had to be done. Because we were all in it together there was a lot of community support for each other. When the War ended it was a great relief. Frank and I then built our house on 7th street behind what is now Charles Street Restaurant. I lived there from 1947 until 2014 when I moved to Merced.

You were born in the twenties, when automobiles were just coming into the mainstream. In 1969, you witnessed a man walk on the Moon. Since then telephones can now act as computers and communication devices. What has that been like?

Watching the Moon walk was exciting, but there were everyday things that were interesting also. For example, I really enjoyed my microwave. My cell phone is great improvement from the phones you had to crank to use. I also appreciated the improvement in the cars. They became more reliable and easier to drive and did not have as many flat tires as when I was younger.

How would you say things have changed in the treatment of women over the years?

Women have more choices than when I graduated high school. Then our choices were pretty much; Secretary, Teacher, Nurse, Homemaker. Now it is acceptable for women to be in almost any job available. I think it’s wonderful they have that choice.

What is your secret to long life?

I was fortunate to live in Mariposa for 85 years. (Smiling). I don’t think there is a secret. You do your best to live a healthy life, but it’s not in our power to decide how long. I’m amazed that I reached 100. Never in my life did I expect that.

What is your advice for young people today?

Be Honest. I have observed it saves you from a lot of trouble. Be honest with your family, friends, and with yourself.